At least six new mega ports have been cleared to be built under the ambitious Sagarmala Project, taken up by the Ministry of Shipping. The National Perspective Plan (NPP) for the much talked about project envisions these new infrastructural facilities as part of its multi-pronged strategy to enhance India’s cargo handling capacity.

The Ministry of Shipping's project, that aims to modernise India's ports, is estimated to save up to Rs 40,000 crore per year spent on logistics by key industries.

According to the NPP, the greenfield ports are likely to come up at Sagar in West Bengal, Paradip Outer Harbour in Odisha, Enayam in Tamil Nadu and Vadhavan in Maharashtra. As part of the Sagarmala Project, detailed masterplans are being developed for all the new major ports.

The new Vadhavan port, estimated to cost around Rs 10,000 crore, will help ease the congestion in the present shipping capacity. Vadhavan currently handles about 40 percent of the total container traffic in India. The new port will be able to handle 40 to 60 million tonne of cargo every year, as per sources in the Ministry. The present capacity of the port is 4.16 million tonne per year. 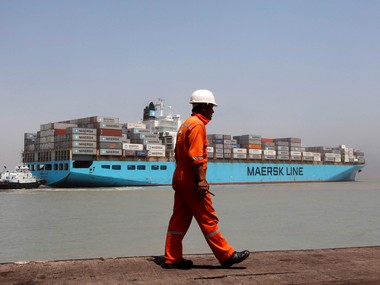 A worker walks past a container ship at Mundra Port in Gujarat. Reuters

The proposed Paradip Outer Harbour project, estimated to cost around Rs 8,200 crore, will be developed to facilitate the coastal shipping of thermal coal for power plants in Southern and Western India. The new port will have a capacity of 175.5 million tonne per year.

Similarly, the Sagar port, proposed to handle the overflow of traffic from Kolkata and Haldia facility, has received an initial grant of Rs 515 crores as viability fund from the Centre.

A special purpose vehicle, named Bhor Sagar Port Limited, has also been floated under the partnership of the Kolkata Port Trust and the West Bengal Government. The project is expected to incur an expenditure of Rs 12,000 crore and IIT Madras has been entrusted with the responsibility of preparing a detailed project report.

The rest 980 million metric tonne capacity needed to meet the target will be fulfilled by enhancing the capacity of major and non-major ports. The new infrastructural facilities will also help enhance India’s earning from the transshipment business. Currently, India loses a lot of foreign currency to Sri Lanka and Singapore due to lack of transshipment facilities.

A whopping 25 percent of the Indian cargo is transshipped in Colombo and Singapore. One of the major reasons behind this is that India’s biggest container port has a draft of just 14 m, whereas a capsize vessel requires it to be above 16 m to load and unload goods.

The new ports will also boost up coastal shipping, thus decreasing the dependence on transportation through railways and roadways. This is likely to cut down the inland transportation costs by up to 80 percent. Presently the country has 12 major ports.