Cancer is one of the ten leading causes of death in India — over 10, 00, 000 new cancer cases are diagnosed, of which, some 7, 00, 000 succumb to cancer every year. Moreover, evidence suggests that the number of newly diagnosed cancer cases is expected to exponentially increase five-fold by 2025.

World Cancer Day is marked on 4 February to raise awareness of cancer and to encourage its prevention, detection, and treatment. It is led by the International Union against Cancer (UICC), a global consortium of 350 cancer-fighting organizations in over 90 countries. World Cancer Day targets the public through global communication, and equally, encourages policy makers and UICC member organizations to make cancer a political priority.

This article focuses on an innovative strategy to detect early breast cancer in India. With some 150, 000 new cases being diagnosed every year, the incidence of breast cancer has overtaken cervical cancer to become the most common cancer affecting women. Due to lack of awareness and absence of an organized population based breast screening programme, more than 60 percent of breast cancers in India present in the advanced stage and most succumb within a year of being diagnosed.

Although introduction of an organized nationwide population based Breast screening programme using mammography as the best proven way of detecting cancers in the impalpable stage in the community, it is not a viable option for mass screening in India. 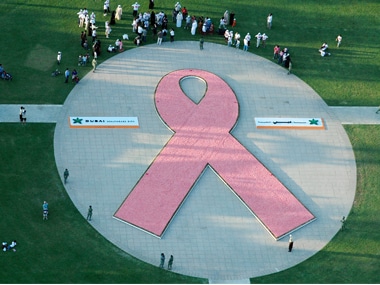 Reasons being — enormous costs involved, huge variation in mammographic reporting and the fact that the vast majority of breast cancers in India are diagnosed in younger women (between 30 – 50 years), where screening mammography is less effective.

Clinical Breast Examination (CBE), where trained healthcare workers examine the breasts of women is relatively simple, inexpensive and there is considerable circumstantial evidence to show that it is a viable option undertaking population based breast cancer screening in India.

Interestingly, the National Family Health Survey (NFHS) released by the Government of India for the years 2015 – 2016 revealed that only 11.1 percent of women in urban Telangana and 8.1 percent in rural Telangana underwent Clinical Breast Examination (CBE).

Since 2012, in an effort to find an ‘Indian solution’ to early detection of Breast Cancer in India, Ushalakshmi Breast Cancer Foundation (UBF), a not for profit Organisation based out of Hyderabad in partnership with the erstwhile governtment of Undivided Andhra Pradesh (2012 - 2014), and more recently, in partnership with Telangana and Andhra Pradesh Mahila Samatha Societies (2014- 2015) has been implementing a large scale population based Breast Cancer Screening Programme spread across 3700 villages in 120 economically backward mandals of 15 Districts in Telangana and Andhra Pradesh.

About 2761 health care workers were empowered about the importance of breast awareness & early signs of breast cancerover the past four years through well-researched audio visual aids. They have also been trained to perform Clinical breast examination (CBE), a screening tool to detect early breast cancer. Some 200, 000 underprivileged women underwent Screening (2012 – 2015) by way of CBE and those diagnosed with early breast cancers through this initiative have been referred for free treatment through the Arogyasree Scheme.

It is expected that all the underprivileged women in Telangana and Andhra Pradesh would have been empowered about importance of early detection of breast cancer and screened for early signs of breast cancer by end of 2020.

The author is a Padma Shri awardee, and president, Association of Breast Surgeons of India, and CEO, Ushalakshmi Breast Cancer Foundation, Hyderabad