India all set to test Agni V missile on Wednesday

Balasore: Range preparation for the maiden test of India's indigenously developed nuclear capable 'Agni-V' ballistic missile with a strike range of over 5,000 km is "near complete" and the trial is likely to be held from Wheeler Island off Odisha coast this Wednesday.

"If everything goes as per schedule, the trial is likely to be taken up on Wednesday from the launch pad-4 of the Integrated Test Range (ITR)," a senior ITR scientist said. 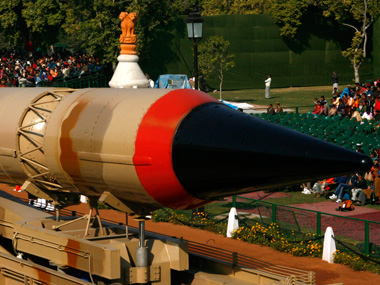 If the trial is successful, it will club India into a select band of countries that possess the technology for ICBM. Reuters

The three stage solid fueled missile would be put into test for the first time with some advance and indigenous technology with the support of a canisterised mobile launcher, said the scientist, adding that "networking and health
parameters of both main and sub-systems have been validated during pre-test check-up".

"For tracking and monitoring the pre-determined trajectory of the missile, sophisticated radars as well as telemetry stations positioned in different locations have been linked up," the scientist said.

As it is a development trial, due attention has been given to the health parameters of this long range missile and some critical technologies have been incorporated, another scientist said, adding that there are two new composite motors to propel the missile to distances bordering ICBM capabilities.

All data about performance are to be thoroughly analysed and assessment has to be made for its next trial accordingly, he said. If the trial is successful, it will club India into a select band of countries in the world to possess the technology for Inter-Continental Ballistic Missiles (ICBM).

The surface-to-surface missile Agni-V which can carry a pay-load of 1 tonne is 17 m long, 2 m wide and weighs 50 tonnes. Scientists associated with Agni-V project are quite optimistic about its performances, as the first trial of Agni-IV on November 15 last year was highly satisfactory in terms of its 'control and guidance' system.