New Delhi: The national capital, including the Red Fort from where Prime Minister Narendra Modi will address the nation on the 71st Independence Day on Tuesday, has been put under an unprecedented ground-to-air security cover.

Close to 70,000 Delhi Police personnel will be guarding the national capital owing to the twin occasions of the Independence Day and Janmashtami festival, a senior police officer said on Monday. 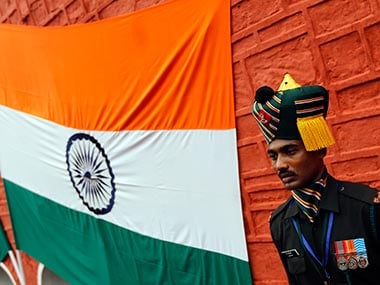 Thousands of security personnel, including 9,100 personnel from the Delhi Police, have been deployed in and around the historic Mughal fort which will see the presence of senior ministers, top bureaucrats, foreign dignitaries and common people during the prime minister's address.

Two dozen Parakram Vans manned by quick reaction teams of NSG-trained commandos have been stationed in areas with high footfall to thwart any attempt by terror groups to disrupt peace.

At Red Fort, a special team of NSG snipers and commandos will form the inner layers of the security cordon while anti-aircraft guns have been deployed to thwart any aerial intrusion by objects like drones and projectiles, senior police officials said.

Also, police are surveying the areas in the vicinity of the Red Fort and have collected details of over 9,000 people residing there. The buildings facing the Red Fort will be secured by police and paramilitary personnel.

Security along the route to be taken by the prime minister's cavalcade from his official residence to Red Fort will be monitored with the help of hundreds of CCTV cameras.

Special "spotters" of Delhi Police and paramilitary will keep an eye on parking areas.

Over 60 sniffer dogs of paramilitary forces and Delhi Police will also be part of the extensive security deployment. Preliminary security arrangements were made in July and senior police and intelligence officials have been regularly taking stock of the arrangements to weed out any shortcomings and glitches.

According to a statement by the Delhi Metro Rail Corporation, train services will run as usual. However, stations like Lal Quila, Jama Masjid, Delhi Gate and ITO will have restricted entry and exit during the ceremony owing to security considerations.

Parking will not be available at the stations till 2 pm on Tuesday in view of the security measures, DMRC said. Security around prominent temples like the Iskcon temple, Lakshmi Narayan temple and the Gouri Shankar temple has been ramped up since large congregations of devotees are expected on Janmasthami festival, the birthday of Lord Krishna.