Travels through the Hindi belt: In dry state Bihar, youths resort to bootlegging as unemployment rises at an alarming 19.4%

Much like the state of Gujarat with a prohibition law for decades, Bihar, too, has slipped into clandestine liquor trade with several jobless youths joining in to make money

At an empty electronic store in a small town in the outskirts of Patna, a conspicuously out of place mirror is mounted on one of the walls. Except it is not just a mirror. It is a door, where a good old-fashioned knock is not sufficient. "Kaun hai be (Who is this)?" a curious voice snaps back. “Hum hain yaar (It's me, friend),” responds the man this reporter has accompanied.

The door opens into a dingy rectangular room with dampened green walls where six gentlemen sitting on imbalanced chairs are smoking cigarettes. No ventilation means the room is hazy, and their faces are blurred to an extent. With the festival of Holi only two weeks away, they are busy discussing how it would affect their trade amidst the noise of a broken table fan and a flickering tube light in the background. They are all bootleggers, part of the proliferating illicit alcohol trade in Bihar. 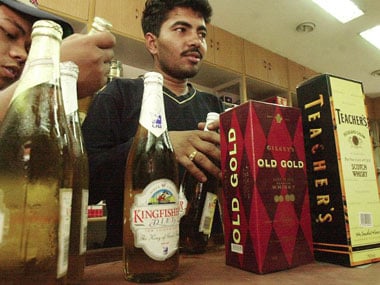 Chief Minister Nitish Kumar banned the consumption and sale of alcohol in April 2016. However, much like the state of Gujarat with a prohibition law for decades, Bihar, too, has slipped into clandestine liquor trade with several jobless youths joining in to make money. When Centre for Monitoring India Economy did a nationwide survey between September and December 2018, it found that the unemployment rate among Bihar’s youth who have passed Class 12 or more is an alarming 19.4 percent.

Ajit (name changed), 26, a political science graduate, says he has been on a job hunt since 2013. “There is lack of vacancies in the government sector and not enough opportunities in the private sector either,” he says. Five of his friends nod in agreement.

“After Nitish Kumar banned alcohol, a man who earlier ran a licensed liquor shop asked me to join him. I initially worked for him as he sold alcohol illegally. Shortly, I became a distributor myself. That is the journey for everybody sitting here,” he adds.

Immediately after the liquor ban, Ajit says, the margin in one quarter of whiskey would be Rs 400 at least. “In 2017, it came down to 200,” he goes on. “Today, we make Rs 50 behind a quarter. The competition is increasing because it has become a safe trade now. We are selling more and more bottles with each month. Every lane has a distributor and he has his 10-15 designated customers. We deliver the bottles at their doorstep."

The liquor is usually smuggled in from Haryana, Punjab and Uttar Pradesh in eight-wheel trucks, or 8-chakka as they call it here. Some of the liquor is made domestically in Bihar as well. A distributor with 10-15 customers normally orders 6-8 trucks a month. One truck contains 500-600 boxes, which are worth Rs 35-40 lakhs. One box either has 48 quarters, or 24 half bottles, or 12 full bottles of whiskey. A full bottle of whiskey costs Rs 600, half sells at Rs 300, and a quarter at Rs 150.

“You will get any kind of whiskey you want, but Imperial Blue and Royal Stag sell the most,” says Ajit, asking if he can offer something right now. After a polite no, he laughs and says, “There is no shortage of alcohol in Bihar.”

In a month, Ajit makes more than Rs 50,000. “If I had landed a government job, my starting salary would have been around Rs 20,000,” he says. Joining the conversation, Nitin (name changed), who was initially reticent to engage, sheepishly says Ajit has just built a one-storeyed house.

Nitin used to work as a labourer in Delhi, where he earned Rs 4,500 per month. Today, his income is 10 times more. "My wife and kids still live in Delhi," he says, adding, "My kids attend school over there. I send money from here. Those who could not own a bicycle have bought cars. Credit where it is due. Nitish Kumar has helped the jobless in this regard. Liquor trucks are a source of employment for us."

The trucks arrive late in the night. Between 11 pm and 2 am. The point of the exchange is usually deep into a farmland where the boxes of liquor are transferred from the truck into small pick-up tempos.

“Our customers know in advance about the delivery,” says Ajit.

“After the exchange in late hours, we distribute the demanded quantity to our customers before sunrise,” he adds.

What about the police?

“They themselves buy from us,” says Ajit, bursting into laughter that soon turns into coughing.

“Doctors and policemen are our most prolific customers. Police get their hafta.”

Immediately after the liquor ban, Nitin says, the network of bootleggers was extremely careful.

"We dealt in code words," he says, adding, "And a new customer had to come through an old one.”

“We also used half a kilo ghee for half bottle of liquor. Nobody used the word liquor. We said ‘samaan’. Not anymore, though. The police, administration, everyone knows what happens on the ground,” adds Nitin.

Nonetheless, the police force is under pressure to show arrests, for alcohol consumption has not stopped and it is an open secret. Since the 2016 liquor ban, 16 lakh litres of India Made Foreign Liquor and nine lakh litres of country-made liquor had been seized and more than 1.4 lakh police cases registered by October 2018, according to excise and prohibition department officials.

That, the bootleggers say, is a tip of the iceberg. Sanjay (name changed), who earlier ran a licensed liquor store chain and now sells illegally, says if the police catch a truck with 500 boxes, they only show 200 on paper. “They either consume or sell the remaining boxes,” he says.

In October 2018, two police officers were arrested in Gopalganj district for selling alcohol. One of them was no less than a SHO.

“When they have to show arrests, they catch poor farmers or labourers consuming liquor, but hardly touch the distributors," says Sanjay, adding, “And even when a distributor is arrested, it would be because he did not pay his hafta on time. Most of the times, the distributors manage things.”

The chief minister had banned liquor in Bihar primarily to curb domestic violence because men often abuse women after getting drunk. Those caught drinking could earlier be imprisoned for 5-7 years or fined up to Rs 7 lakh. That punishment has been watered down.

Nonetheless, a prospective punishment from 10 years to life imprisonment for making or distributing alcohol has not proved to be a deterrent.

Sanjay says the liquor ban, in fact, has been profitable. “I used to run a chain of liquor stores,” he says. “I made Rs 2 lakh profit per month. Now, I don't have to pay excise duty or taxes. I make around Rs 5 lakh per month.”

Before the liquor ban, the state of Bihar earned revenue of over Rs 4,000 crores from liquor sales. “The money is still part of the economy, but the state is not getting it," says Sanjay.

"An increase of black money is not the only downside of the liquor ban. Several school kids now work for various distributors as delivery boys. They carry it in their school bags, just like you saw in Shah Rukh Khan’s movie Raees,” he adds.

Speaking of downsides, the liquor ban has also paved the way for spurious alcohol in Bihar. Ajit says the quality of alcohol would be checked when it was legal. “Now it is only about quantity,” he says, adding, “Duplicate labels have entered the market. People know it, but they still buy because they are addicted or they do not have options. In any case, it is not my concern. I have never been a drinker.”

Never? I ask with a tinge of surprise in the tone. “A halwai need not have a sweet tooth,” he replies.