In CBI-Alok Verma case, maligning Justice AK Sikri for his deciding vote and targeting CVC inquiry do democracy no good

Former United States president Chester A Arthur, who was also a distinguished attorney, once said, "Men may die, but the fabrics of free institutions remains unshaken." Sadly, in the case of ousted Central Bureau of Investigation (CBI) director Alok Verma, it is becoming evident that to save an individual, all democratic institutions are not only being shaken to the hilt but are also being defamed and damaged beyond repair.

Verma, against whom several allegations of corruption stand "correct", "substantiated" or "partially substantiated" has been made to look like a victim since the Central Vigilance Commission (CVC) submitted its report, and all democratic institutions have been dubbed "perpetrators".

On 10 January, Verma was removed from his post at the CBI after a high-powered selection committee, comprising Prime Minister Narendra Modi, Leader of the Opposition in the Lok Sabha Mallikarjun Kharge and Justice AK Sikri of the Supreme Court, who was nominated by Chief Justice of India Ranjan Gogoi to represent him, recommended his transfer. 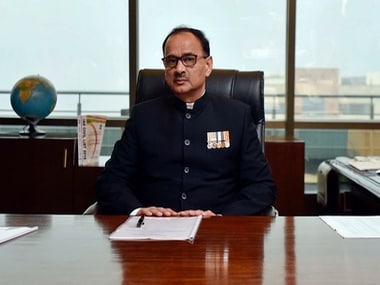 It was clear from the beginning that the prime minister's vote would be against Verma and Kharge's vote would be in favour of the ousted CBI chief. A point that everyone will agree on is that it was the casting vote of the Supreme Court judge that swung the panel's decision against Verma, which otherwise would have drawn a totally different result.

Whether Justice Sikri would be hailed as a hero "who saved democracy by saving Alok Verma" or would face slander and insinuations would have depended on whether he voted for or against Verma. As he voted against Verma, ensuring his transfer, it took no time for the expected to unfold: Ulterior motives were attributed to his decision. A news website reported that Justice Sikri had been offered and had consented to being appointed a member of the London-based Commonwealth Secretariat Arbitral Tribunal (CSAT). The report, with the headline "Justice Sikri, whose vote decided Alok Verma's fate, gets Modi government nod for plum posting", clearly hinted at a quid pro quo, after which Sikri wrote to the law ministry to formally withdraw his consent from being appointed a CSAT member.

While the fact remains that Justice Sikri was offered this post and he consented to his appointment much before he was nominated to hear Verma's case by the chief justice, it mattered least to those fighting to "save democracy".

However, those questioning Verma's removal from the CBI director's post by casting aspersions on the selection committee's decision were quick to point out that the Supreme Court judge, knowing that he was taking a post-retirement post, should have recused from being part of the panel meeting. In this case specifically, the argument that a judge should be above suspicion only accentuates the palpable hypocrisy.

The apologists to the ousted CBI chief need to answer whether the same rule applies to the head of an investigative agency whose most important mandate is to check corruption. They need to answer why Verma did not resign when faced with serious allegations of corruption and failing to protect the integrity of the agency. Why not expect such "virtuous" code of conduct from the CBI chief?

The second most senior judge of the top court was conveniently and swiftly placed under the shadow of suspicion just because he had consented to an offer by the government, much before he became part of the panel that was to decide the fate of an officer who has been projected to be above any institution and an elected government.

If institutions are targeted in a similar manner, it would not only damage their reputation but would also lead to the collapse of the entire institutional edifice.

Consider this: The law provides that the chairperson and two members of the National Human Rights Commission (NHRC) should be a former chief justice of India, a practicing or retired judge of the Supreme Court of India and a present or retired chief justice of a high court. The question that arises is whether the Supreme Court and high court judges, the future chairperson and members of the NHRC, should accept these posts at all as in their entire tenure, they may have delivered a few judgments "favourable" to the government.

Does this mean that to qualify for a post retirement position, a judge must have only given "anti-government" judgments?

The most important question is whether the fairness of a decision can be judged by whether it suits a particular narrative, a certain viewpoint and some vested interests, or by the fact that it honoured procedures established by law.

Damage inflicted on constitutional bodies cause for concern

The institutional damage in the current case is not limited to the judiciary but has spilled over many other institutions. While constitutional-political offices like that of the prime minister are bound to face the Opposition's onslaught in a democracy, it is the damage done to institutions like the judiciary and statutory bodies like the Central Vigilance Commission (CVC) that are cause for grave concern.

The CVC was established in 1964 on the recommendations of the Committee on Prevention of Corruption, headed by K Santhanam, to advise and guide central government agencies in the field of vigilance. It took more than three decades before the CVC acquired a statutory status through an ordinance in 1998. It was that year that the CVC was granted powers to exercise superintendence over the functioning of the CBI and also to review the progress of agency's investigations into alleged offences under the Prevention of Corruption Act, 1988.

An Act of Parliament finally replaced the ordinance in 2003, and the next year, the CVC became the designated authority to receive written complaints for disclosure on any allegation of corruption, or misuse of office, and to recommend appropriate action.

This was the agency entrusted with the task of investigating the charges against Verma. In its inquiry report — as Kharge highlighted in his dissent note — four of the 11 charges against Verma were "substantiated"; the allegation in one case was "partially substantiated"; and those in four cases were "not substantiated" and needed no further inquiry. The CVC said that further inquiry was needed in a case and also recommended re-investigation by a different branch of the CBI in one. In another case, the commission said the allegations were found to be true.

But as the report failed to give a "complete clean chit" to Verma, the CVC investigation was dubbed "compromised", and Central Vigilance Commissioner KV Chowdary has been accused being a "puppet" in the hands of the government.

On Sunday, Congress spokesperson Abhishek Manu Singhvi alleged that the CVC had acted as an "ambassador" for CBI special director Rakesh Asthana and as an agent and messenger for the government to do "their hatchet jobs". In a series of tweets, he made serious allegations against the CVC chief and sought his removal.

Retired Justice AK Patnaik has only added to this is a bizarre assertion. One of the supervisors in the CVC investigation against Verma, Patnaik said "there was no substantiating evidence to back the corruption charges" against Verma. At the same time, he had said, "The principle of natural justice was fully followed during the CVC inquiry against Verma. As the supervisor appointed by the Supreme Court, it was my job to ensure that the principle of natural justice was scrupulously adhered to."

Justice Patnaik also said that he had not authored any of the findings in the CVC report, and that Verma had had access to all the documents and was granted a personal hearing, as well, in the course of the investigation. He further claimed that there was no evidence of corruption against Verma, whereas at least two allegations against the former CBI director were found to be true, as highlighted in Kharge's dissent note.

When read together to come to a coherent conclusion, all these statements only cause more confusion.

In this case, two facts remain most important. First, the CVC, in its investigation, found a few allegations against Verma to be true, which formed the basis of his transfer from the director's post. Second, the selection committee could decide on Verma's transfer because of Justice Sikri's vote. These two facts alone can establish the fairness of the decision, and it won't do any good to the democracy to target independent institutions like the judiciary and CVC.

People should understand this.