The crash which occurred at a place, about 8 km from Barmer city, left a motorcyclist injured. Barmer district in the western part of the state shares border with Pakistan. 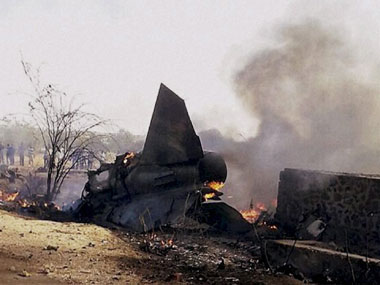 A MiG-27 of the Indian Air Force crashes in Barmer district in Rajasthan on Tuesday. PTI

IAF sources said the crash occurred at about 3.10 pm.

The pilot ejected safely but a civilian was injured and his motorcycle got damaged in the incident, they said.

"The plane was on a routine sortie from Jodhpur airbase to Uttarlai airbase in Barmer when it crashed," defence spokesperson Lt Col Manish Ojha said over phone from Jodhpur.

"The pilot bailed out safely and was taken to a hospital," he said.

SP Barmer Anil Paris Deshmukh said a man who was on a motorcycle was injured in the incident.

"The man got hit by a burning portion of the plane which crashed at Seokar Road near Mahabar village," he said.

The police control room said that the injured local civilian, identified as Loon Singh, has been admitted to the district hospital.

The defence spokesperson added that a court of inquiry has been ordered.