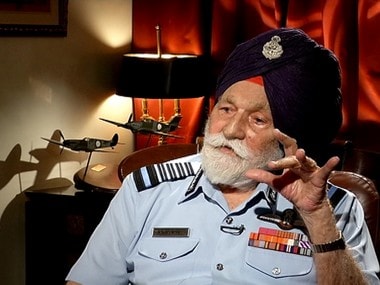 The hero of the 1965 India-Pakistan war and the only Air Force officer to be promoted to five-star rank died in Delhi on Saturday. He was 98.

The Punjab governor said the officer's outstanding leadership in the 1965 war would always be remembered.

"In the death of Marshal of the Indian Air Force Arjan Singh, the nation has lost a highly decorated soldier, who was always ready to defend the borders," he said in his condolence message.

The Punjab chief minister also declared a three-day state mourning as a mark of respect to the officer.

There would be no official celebrations and the national flag would fly at half-mast atop all government buildings in Punjab during these three days, an official spokesperson said.

Expressing deep sorrow, Khattar said the country has lost a war hero who will always be remembered for his outstanding services to the nation.

As a mark of respect, the Haryana government has also decided that the national flag will fly half-mast tomorrow atop all buildings, where it the tricolour is hoisted regularly.

Badal has asked Shiromani Gurdwara Parbandhak Committee chief Kirpal Singh Badungar to place a picture of Singh in the Sikh museum in Amritsar.

A state funeral will be accorded to Singh and his last rites would be performed at Delhi on Monday.