Hyderabad: The Telangana High Court on Saturday directed re-postmortem of the bodies of four accused in the gang-rape and murder of a woman veterinarian near Hyderabad in November. The accused were killed in a police encounter on 6 December. 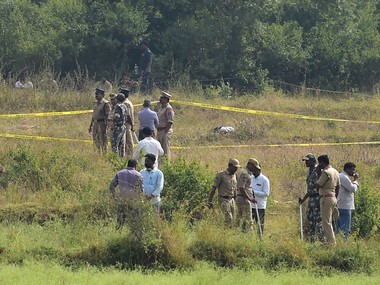 File image of policemen standing guard at the area where the four accused in the Hyderabad rape-and-murder case were killed. PTI

The bodies of the four accused are preserved in the state-run Gandhi Hospital in the city as per earlier orders of the High Court, after some petitions were filed alleging extra-judicial killing of the men and claiming it was a fake encounter among others.

The High Court directed the state government to request AIIMS Delhi to constitute a medical team with three expert forensic specialists to conduct a second postmortem of the bodies of the four men.

The four accused were arrested on 29 November for allegedly raping and killing the woman by smothering her and later burning her body.

On 6 December, they were gunned down by police at Chattanpalli when they were taken to the scene of crime near the culvert, under which the charred remains of the 25-year old veterinarian were found on 28 November, to recover her phone, wrist watch and others pertaining to the case.