Heavy rainfall, snow expected in Jammu and Kashmir, Himachal Pradesh between 11 and 14 December

Heavy snow and rainfall is likely to hit Himachal Pradesh and Jammu and Kashmir in the next week due to Western Disturbances in the weather systems.

According to Skymet Weather, light to moderate rainfall and snowing is expected in parts of northern states of Jammu and Kashmir and Himachal Pradesh. The intensity will increase as time progresses. The report also predicted light rainfall in Uttarakhand in the next 24 hours as well. 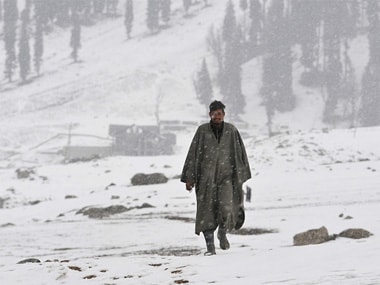 The reason for this is an active Western Disturbance developing over north Pakistan and Jammu and Kashmir.

Rains in the hilly states is likely to be followed by snowfall which will pick up pace on 12 December, according to the report. Between 11-13 December, moderate to heavy rains and snowfall is expected in both states.

According to another report in Skymet, areas such as Gulmarg, Pahalgam, Kufri, Lahaul, Spiti and Kinnaur are expected to experience snow. Rainfall and snow activity is likely to increase in high-altitude areas.

As per The Times of India, rain and snow has been predicted for Shimla as well. The report, quoting the Shimla meteorological centre, stated, many places in the middle and high hills will receive rain and thundershowers during this period. Rain and snowfall is forecast in few parts of the state on 14 December.

The Srinagar-Leh highway, connecting the frontier Ladakh region with the rest of the state, was closed for traffic on Sunday for the winter season, ahead of expected heavy snowfall, an official said. The highway, which is the only surface link between Kashmir valley and the Ladakh region, has been closed for traffic following the instructions of the Divisional Commissioner Kashmir, Baseer Ahmad Khan, said an official of the traffic department.

The Met Department has said a fresh Western Disturbance is most likely to affect the state from Monday to 15 December with moisture feeding taking place from the Arabian Sea. “Under the influence of this system, moderate to heavy rain or snow is expected at widespread places of Jammu, Kashmir and the Ladakh region," said the Met office.

“The main activity of this system (moderate to heavy rainfall or snowfall) is likely to occur during 12-13 December and gradual decrease thereafter,” the Met office said. It said this would be the first major wet spell during the current season for the state and the weather system may lead to disruption of surface and air transportation.

The 434-kilometre highway acts as a major lifeline to the frontier region. The Zojilla Pass, 140 kilometres from Srinagar, is a vital crossing point on the mountainous highway and receives the heaviest snowfall in winter, shutting it down for nearly five months each year.