The government may have claimed that the occupants of the 'terror boat' intercepted by the Coast Guard on 31 December, 2014 set themselves on fire but a statement by a senior Coast Guard official saying that he had ordered the boat to be 'blown off' may just open a can of worms on the incident again.

In an exclusive report, the Indian Express today quoted a Deputy Inspector General of the Coast Guard, B K Loshali, saying that he was there at Gandhinagar and he had ordered officials to 'blow the boat off' as opposed to government's he claim that the boat  had blown itself up under suspicious circumstances.

The DIG's statements came while he was launching the boat and the report quotes him as saying that while he had prepared a written speech, he would deviate from it to express what was in his heart. 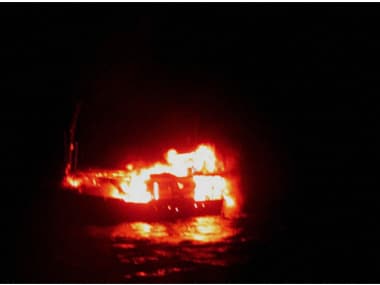 An image of the boat involved in the incident. PTI

While Lokshali's off-the-cuff statement is likely to land him in hot water, it perhaps hints that the Coast Guard vessel that pursued the fishing vessel that set sail from Karachi may have used disproportionate force to handle the situation.

The defence establishment and Defence Minister Manohar Parrikar have consistently maintained that the occupants of the boat had set fire to the vessel after  leading the Coast Guard on a chase.

Coast Guard officials have maintained that after receiving an intelligence input they had pursued the ship with an aircraft and a vessel. They said that instead of surrendering "the boat started moving in a zig-zag way and switched off lights."

The occupants of the boat allegedly ignored warning shots that were fired at it and after some time its occupants were accused of setting the vessel on fire, resulting in it sinking. No evidence had emerged of the occupants carrying explosives.

The government had also claimed that they had evidence of call intercepts that were made from the boat to Pakistan and that the occupants were suspected terrorists.

Defence Minister Parrikar in an interview ducked questions on Pakistan Army's involvement in the case, as claimed by him earlier, saying intercepts were "irrelevant" to the operation and how it ended and also said the crew may have taken cyanide pills to commit suicide.

Pakistan had said it expected India to conduct a "transparent" probe and had said that its own investigation has shown that there was "no sound evidence" to substantiate India's assertions.

Given the controversy over the incident had died down, the Coast Guard official's statements won't help the already tenuous ties between India and Pakistan.