Mumbai: The Bombay High Court on Thursday granted bail to former IPS officer of Gujarat DG Vanzara, in jail for over seven years, in the Sohrabuddin Sheikh fake encounter case. 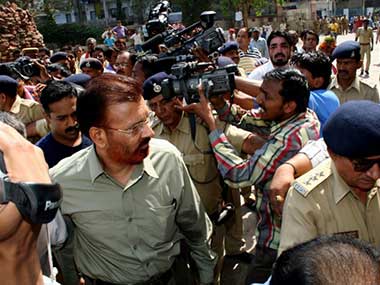 Vanzara, a Deputy Inspector General-rank officer, was arrested on 24 April, 2007, along with two other IPS officers Rajkumar Pandian and Dinesh MN, in connection with the alleged staged encounter killing of gangster Sohrabuddin Sheikh, who was claimed to have links to Pakistan-based terror outfit Lashkar-e-Taiba. Sheikh's wife Kausar Bi was also alleged to have been killed by Gujarat police.

Justice AM Thipsay ordered the release of Vanzara on a bond of Rs two lakh and one surety of the like amount or a bond of Rs one lakh and two sureties of the same amount, whichever suited him.

The judge asked Vanzara to surrender his passport to CBI and present himself before the trial court in Mumbai every Monday, Wednesday and Friday till the hearing of the case concludes.

Vanzara was also warned against tampering with evidence or threatening witnesses. In case he wants exemption from appearance, he will have to give prior notice to the trial court, said Justice Thipsay while granting bail.

According to CBI, Sohrabuddin and his wife were abducted by Gujarat's Anti-Terrorism Squad when they were on way from Hyderabad to Sangli in Maharashtra and killed in an alleged staged encounter near Gandhinagar in November 2005.

Tulsiram Prajapati, an eyewitness to the encounter, was also allegedly killed by police in a fake encounter at Chapri village in Banaskantha district of Gujarat in December 2006.

Though granted bail in Sohrabuddin fake encounter case, Vanzara will not be released as he is yet to get similar relief in the Prajapati case and the one related to the killing of Mumbra girl Ishrat Jahan and three others, also in allegedly in a staged encounter. The four, who were claimed to be associated with LeT, were killed by Ahmedabad police's crime branch on 15 June 2004.

The Sohrabuddin Shaikh and Prajapati encounter cases are being heard simultaneously in a Mumbai Court.

The CBI has charge-sheeted 37 accused including BJP president Amit Shah, who was Minister of State for Home of Gujarat when these encounters took place, and several police officers in the two cases. Some of the accused, including Shah, have been granted bail.

Taking into account the alleged threat to witnesses, the Supreme Court had transferred the case from Ahmedabad to Mumbai to ensure a fair trial.

Two days ago, the trial court had rejected the bail plea of N H Dhabi, a former police inspector of Gujarat ATS who had allegedly fired at Sohrabuddin Sheikh, saying he had played a direct role in the killing.

Dhabi had allegedly kidnapped Sheikh from Andhra Pradesh and was part of the police team that killed the gangster in a fake encounter.

Another IPS officer of Gujarat cadre Rajkumar Pandian, who is also an accused in the case, was granted bail by the Supreme Court in March after he had spent seven years in jail.

Abhay Chudasama, another IPS officer and an accused in the Sohrabuddin Sheikh case, was recently reinstated by Gujarat government.