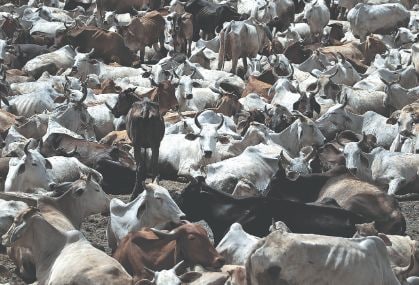 Flavour of poll season in UP is gaushalas

For the last two months, eight-year-old Prashant Singh has been late to school. Every morning, Prashant and his friends make a quick stop at the local cow shelter on way to school. No one, including his teachers and parents, seems to mind that. The boys carry with them dinner leftovers and leave them at the gaushala, where they fold their hands and close their eyes to sing a prayer before rushing off.

The gaushala in Chandaus that opened in January has not just altered the school routine of some children but has completely transformed this village in Uttar Pradesh’s Aligarh district. While farmers are relived, Muslims and Dalits feel it has driven a wedge between communities.

Cow shelters like the one in Chandaus have come up across Uttar Pradesh, which sends the largest number of members, 80, to the Lok Sabha. Ahead of the seven-phase national election, the ruling BJP is trying to showcase such shelters as a proof of its commitment to protecting the cow. Rivals accuse the Adityanath government of putting cattle before farmers battling agricultural distress and the menace of stray cows.

Back at their one-room school, a “Show Sympathy Towards Animals” message, painted in bold red, greets Prashant and his friends.

The gaushala is a godsend for Prashant’s father, Mahendra Singh. “I had to spend the nights on the farm, guarding my crops from stray cows. My elder son had to do so during the day,” he said.

Mahendra is among hundreds of farmers in Uttar Pradesh hit by the stray cattle menace, which has multiplied over the last two years, following a blanket ban on cow slaughter and shutting down of illegal abattoirs. Farmers are abandoning cows as they cannot afford to feed them.

“Shutting down of illegal slaughterhouses added to the stray cattle menace. This coupled with lack of cow shelters made it worse,” said Jitendra Singh, another farmer in the village.

Farmers have been forced to keep stray and hungry cattle away from their fields where wheat crop is ripe for harvesting. With the harvest season coinciding with campaigning for the Lok Sabha, strays are a big election issue.

Former chief minister and Samajwadi Party chief Akhilesh Yadav has been unsparing in his criticism of the government. “I would like to tell the chief minister that the people have given him 90 days. Do something to save the crops from the bulls. Farmers need to be saved first,” he said at a public meeting a few weeks ago.

The polling for Lok Sabha begins on April 11 and ends May 19, with voting in Uttar Pradesh staggered across all the seven phases.

It is lunch time. Suddenly a group of BJP workers and members of Hindu right-wing outfits reach the cow shelter. The gaushala looks like a BJP office.

The men invite farmers, returning from their fields, to join them as they talk about efforts made by the BJP to keep stray cattle off their farms. The men also tell farmers that Adityanath had set aside a record sum of money for cows. In its budget for 2019-2020, the government allocated Rs 447 crore for the upkeep of the stray cattle.

While Mahendra and Jats like him have warmed up to the idea of the gaushala, Muslims and Dalits in the village are keeping their distance.

In May, 2017, the state government amended the 1960 Prevention of Cruelty to Animals Act, saying that cows, camels and buffaloes may be sold to farmers only for farm purposes and not for slaughter. It has led to the closure of several slaughterhouses and tanneries. Many have lost jobs and Shamim Khan is one of them.

“People are afraid these days, especially in northern parts of India. Suppliers are finding it hard to transport cattle. Cow vigilantism and new rules for sale of cattle have dried up business for the leather industry,” said Khan, who used to work at the local tannery.

Suresh, a Jatav dalit, lost his job in March 2018 after the local slaughterhouse shut down, where he used to be paid Rs 7,000 a month. He is now a farmhand and his income has dropped by half.

“The village seems all the more divided now that gaushalas are being built. Hindus are happy that cows are being protected while for others, who worked in cow-related industries, the loss of employment is galling,” he said.

When it ordered a crackdown on illegal slaughterhouses and meat-sellers operating without licences, the Adityanath government was accused of targeting Muslims and Dalits, who accounted for a sizable chunk of the workforce.

Ravi Srivastava, professor of economics at Jawaharlal Nehru University’s Centre for the Study of Regional Development, sees a grimmer future.

Cows and other dairy animals were supposed to be an asset and couldn’t be turned into a liability, he said. “An increasing number of farmers are disinclined to keep cattle now. If this continues and they are unable to sell their redundant cattle, the cost per unit of milk will automatically go up,” Srivastava said. A fund-collection drive is another change that the gaushala has brought to Chandaus. Not just Chandaus, BJP workers are going around several villages seeking donations in the name of the cow, which is considered a holy animal by Hindus.

The task of collecting funds has been assigned to new recruits, who also use the opportunity to seek support for the BJP.

During one such drive, BJP workers reach Mahender Singh’s house. He barely makes enough to feed his family of six but doesn’t mind parting with Rs 500 a month for the upkeep of the gaushala.

“We do not pressurise anyone for money. The villagers pay on their own because they have been through the menace caused by stray cows,” said Ravi Kumar, who recently joined the BJP.

They sought donations every month because feeding the cows, 180 of them, was costly. “It is also a chance to remind people that it was the BJP who took the initiative to set up cow shelters,” he said.

The gaushala was built by BJP worker Manvendra Singh on his land. Stray cows were destroying crops and disrupting movement of vehicles. “Here the cows are safe and farmers will also not have a problem,” said Singh, who pegged the daily expenditure of the shelter at Rs 12,000.

The school day has ended. Prashant and his friends are back at the gaushala, with a chapatti each that they had saved from the mid-day meal. No prayers are to be offered. They have done their bit for the cows for the day. Now it is playtime. After suspending labour laws, UP okays Migration Commission: What this means for the Indian migrant worker