New Delhi: The Supreme Court Monday agreed in principle that filing of a false affidavit during an election is a "corrupt practice" but refused to direct Parliament to enact a law to disqualify such a person from contesting the poll.

The top court said it "agrees that the election affidavit should be treated seriously, but we cannot direct for a legislation". 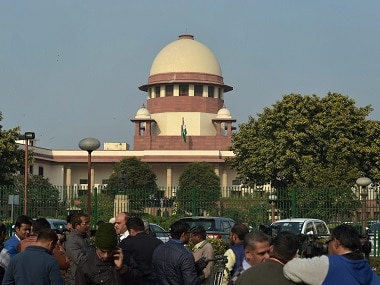 A bench of Justices SA Bobde and L Nageswara Rao tagged the plea along with the pending petition and said all the petitions will be heard together. "We agree with you in principle that the affidavit should be treated seriously. We agree with you on morality, but we cannot direct for a legislation. We cannot direct Parliament that they should include it in corrupt practices," the bench said.

The bench was hearing a petition filed by BJP leader and advocate Ashwini Kumar Upadhyay seeking a direction to the Centre to take appropriate steps to make false declaration before the Election Commission and Chief Electoral Officer an electoral offence in line with the important electoral reforms proposed by the poll panel.

At the outset, senior advocate Rana Mukherjee, appearing for Upadhyay, said now that elections are on the anvil, the court should direct the Centre to take appropriate steps to increase the punishment for filing a false affidavit to two-year imprisonment, declare it as a corrupt practice and disqualify such a person from contesting.

He said this was also recommended by the Law Commission of India in its 244th Report and the Election commission had also proposed for cleansing the politics.

Mukherjee said that section 125A of RP Act makes filing of false affidavit an offence punishable with just six months imprisonment, but it was a much serious offence and should be included in the corrupt practices under section 123 of RP Act.

The bench said it cannot direct Parliament to make a particular act "a corrupt practice".

Mukherjee said the court had asked for regulations while doing it for Vishaka guidelines relating to sexual harassment at work place. "We are not saying you are wrong, but it is Parliament's domain of legislation. Why should we direct, let the people legislate," the bench said.

Upadhyay in his petition has sought declaration of the words "or with fine, or with both" occurring in Sections 125 and 125A of the RPA, 1951, as "arbitrary, irrational and contrary to Articles 14, 19 and 324 of the Constitution of India, hence void and inoperative".

It also sought a direction to Centre to take appropriate steps to implement the suggestions proposed by the Election Commission.