Faridabad: Nearly 100 members of a community have taken shelter in a police station after fleeing Monday night violence over construction of a religious structure in Atali village in Faridabad and were refusing to return to their homes despite the police assuring them of security. 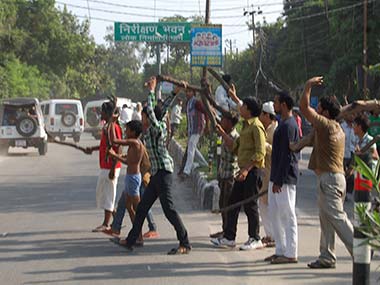 At least five persons were injured and around 15 houses gutted in the clash between the two communities that has triggered tension in the area on the outskirts of Delhi.

According to SHO in-charge Preetpal, the fear-stricken people were allowed to stay at the station following the violence. Though police has assured them that it will provide them adequate security, these people have refused to return to their homes.

Members of the Minority Commission reached on Wednesday and were trying to convince the people to return, police said.

The trouble began on Monday when the roof of the religious structure was being laid. A group of people from the other community turned violent and started pelting stones. The other side too retaliated.

The group poured kerosene on the houses of those belonging to the community and set them afire.

Section 144 was imposed in the village after the incident, police had said, adding, twenty people had been booked under various sections of the IPC and Arms Act.

The SHO of Police Station Chainsa was suspended after the incident.

Police force from six nearby districts was called to control the situation, an official said, adding that flag march was also conducted by the police.

Local MLA Moolchand Sharma said a meeting was organised in the SDM's office today in which people from both the communities participated and the matter was resolved.

The government will compensate those affected and action will be taken against the accused, the MLA had said.