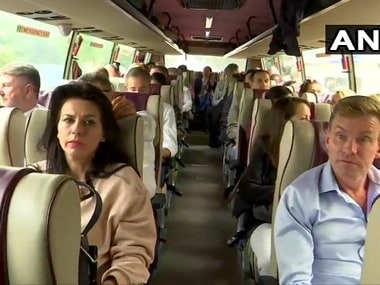 European lawmakers visit Kashmir LATEST Updates: A senior UK politician claimed on Tuesday that the Indian government withdrew with little explanation an invitation to be part of the European Union delegation currently on a visit to Kashmir after he demanded to speak with local people without a police escort. The team originally comprised 27 parliamentarians, mostly from extreme right or right wing parties, but four did not travel to Kashmir and have reportedly returned to their respective countries.

Liberal Democrat Member of the European Parliament (MEP) Chris Davies said the decision showed the Indian government was trying to hide the "reality of its actions" and blocking absolute freedom of the press. "I am not prepared to take part in a PR stunt for the Modi government and pretend that all is well. It is very clear that democratic principles are being subverted in Kashmir, and the world needs to start taking notice," said Davies, whose invite for the visit between October 27 and 30 was reportedly rescinded.

In the meeting with European Union MPs at the 15 Corps headquarters in Jammu and Kashmir's Srinagar on Tuesday, officials of security forces including the Indian Army, briefed them on several things, including on "the role of Pakistan in fuelling terrorism in the Kashmir valley and the role of Pakistani Army in pushing terrorists into India," ANI reported.

Officials of the Indian Army will brief the delegation of European Union MPs during their visit to Jammu and Kashmir on Tuesday, India Today reported. Security forces are likely to brief the politicians in the 15 Corps headquarters in Srinagar.

It is important to note that the visit of European Union lawmakers was arranged in private capacity by the Ministry of External Affairs (MEA) and is an unofficial visit. Besides, according to media reports, of the 27 parliamentarians, 24 of them are from far-right parties.

Six French MPs are from Marine Le Pen's National Front, the six Polish MPS are from the ruling far-right party and the British MPs belong to the Brexit party, India Today reported.

Ahead of the Jammu and Kashmir reorganisation act taking effect in Jammu and Kashmir on 31 October, a delegation of European Union (EU) members of Parliament (MPs) will visit the state on Tuesday. This is the first trip to the region by a foreign delegation since the abrogation of Article 370.

The group, comprising 27 MPs, will return from the state on Wednesday after the visit said aims to give deputies "a better understanding of the cultural and religious diversity of the region of Jammu, Kashmir and Ladakh".

"The delegation of MEPs is not on an official visit in India and came here at the invitation of a non-government group. We are not organising any of their meetings," an EU official in India told AFP, speaking on condition of anonymity. The group of MPs from nine countries is dominated by right-wing deputies from Poland, France and Britain.

Thierry Mariani, a Euro MP for France's far-right National Rally, told AFP "we are going to see the situation in Kashmir, at least what they want to show us".

During the two-day visit, they are also likely to call on the Governor and interact with the media. The delegation includes Italy's Fulvio Martusciello, UK's David Richard Bull, Italy's Gianna Gancia, France's Julie Lechanteux, Czech Republic's Tomas Zdechovsky, Slovakia's Peter Pollak and Germany's Nicolas Fest. "It (abrogation of Article 370) is India's internal matter as Kashmir is its part. It is the prerogative of Indian government to take internal decisions. We are with India on this," Zdechovsky told PTI.

Last month, the European Parliament had discussed Jammu and Kashmir, its lawmakers had expressed both support for Centre's efforts to restore normalcy and criticism for the restrictions placed on the state.

Ahead of their two-day Kashmir visit, Members of European Parliament met Prime Minister Narendra Modi, who categorically told them that an urgent action was needed against those supporting and sponsoring terrorism.

Congress leaders, including Rahul Gandhi, Shashi Tharoor and Jairam Ramesh, criticised the visit by the European Union MPs, pointing out that the Indian opposition leaders were not allowed to do so. Rahul Gandhi and other opposition leaders were turned away from the Srinagar airport when they tried to visit Jammu and Kashmir in August. Later that month, former chief minister Ghulam Nabi Azad was detained while trying to enter the region.

The visit by MPs comes a week after a group of US lawmakers expressed concern about the situation in Jammu and Kashmir following the Centre's move to abrogate Article 370 and bifurcate the state into two union territories. Alice Wells, the Acting US Assistant Secretary of State, had said the US State department had "raised concerns with the Indian government regarding the detentions of local residents and political leaders, including three former Chief Ministers of Jammu and Kashmir".

Two attacks in the Valley cast a shadow on the security situation ahead of the MPs’ visit. Fifteen civilians were injured in a grenade attack by terrorists in at a bus stand in Jammu and Kashmir's Sopore town on Monday. A truck driver was killed by suspected militants in Anantnag district. This was the fourth death of a trucker in the Valley since 5 August.

Process of formation of the Union Territories of Jammu and Kashmir and Ladakh will begin with the swearing-in of Lieutenant Governors in Srinagar and Leh respectively. Chief Justice of Jammu and Kashmir High Court Gita Mittal will administer the oath to Girish Chandra Murmu in Srinagar and then Radha Krishma Mahur in Leh. Earlier, the Home Ministry had appointed a three-member committee to take stock of the assets and liabilities of the state. The committee is yet to submit its report.

After 31 October, 106 Central laws will be applicable to the state, along with 166 State Acts, including the Governor’s Act.