The 73-day standoff between Indian and Chinese troops at the Doklam Plateau in June 2017 proved to be the biggest challenge for India’s military and diplomatic establishment. It also showed up the inadequacy of India’s strategic defence infrastructure.

IndiaSpend highlights five developments in 2017 that show why India must do more to fill the ever expanding holes in its security apparatus.

The Doka la standoff and why border roads are critical

The Doka La standoff began on 16 June, 2017, after Indian soldiers objected to China’s attempts at building a motorable road at the India-China-Bhutan tri-junction near Sikkim. This is a Bhutanese territory claimed by Beijing. The road, if built, could give China a crucial strategic military advantage over India, altering the status quo.

The standoff proved that India needs better infrastructure along the Sino-Indian border, especially roads. These roads are crucial for the deployment of troops and the supply of resources in remote border regions in the event of conflict.

In 2006-07, India had approved the construction of 73 strategic border roads scheduled for completion by 2012. However, only 27 of these have been constructed by the Border Roads Organization, according to data tabled in the Lok Sabha on 4 August, 2017. 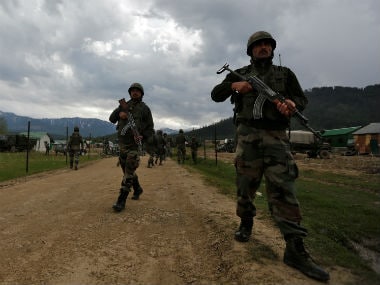 The deadline for the construction of these roads has been extended to 2020.

China, on the other hand, has constructed an “extensive network of railway lines, highways, metal-top roads, air bases, radars, logistics hubs and other infrastructure in the Tibet Autonomous Region” bordering India, The Times of India reported on 21 August, 2017.

China has started “flexing its muscles” and is resorting to “salami slicing, taking over territory in a very gradual manner”, Indian Army chief General Bipin Rawat had said referring to the Doka La standoff. He also spoke of the need to “remain prepared for situations” which could result in conflict.

In Jammu and Kashmir, 30 percent rise in deaths from terrorist violence

There has been a 30 percent increase in deaths from terrorist violence in Jammu Kashmir – from 267 in 2016 to 347 in 2017 (upto 17 December), according to data from the South Asia Terrorism Portal (SATP) run by the New Delhi-based non-profit, Institute for Conflict Management.

This increase indicated an overall worsening of the security situation in the state.

Terrorism-related deaths in Jammu and Kashmir increased 31 percent in the one year since the Indian Army conducted what it describes as “surgical strikes” in Pakistan-Occupied Kashmir (PoK), IndiaSpend had reported on 29 September, 2017.

Six new submarines, but 13 wait to be replaced

This development has given India’s fledgling fleet submarine arm some muscle.

The Indian Navy has a planned force level of 18 conventional submarines, according to a Parliamentary Standing Committee Report on Defence.

With Kalvari’s addition, the navy has 14 conventional submarines. But, 13 of these are between 13- and 31-years-old and need to be replaced.

The Indian government has also issued a request for information from foreign manufacturers for the Navy’s Project 75(I) requirement for six conventional submarines which will be manufactured in Indian shipyards.

Warship shortage as China pushes ahead in Indian Ocean

The PLA-N has 24 destroyers, according to latest data released by the US Department of Defense. That’s more than twice as many as India (11). Destroyers are frontline warships for both the PLA-N and Indian Navy. They possess powerful radars, can travel long distances and are capable of handling land attack, missile defence, and surface and anti-submarine warfare.

China’s widening naval capabilities and India’s shortages need to be seen in the context of the PLA-N’s growing presence in the Indian Ocean. “Chinese activity in the Indian Ocean has touched a new high in recent months,” an Indian Navy official had been reported saying in Hindustan Times on 5 July, 2017.

India is now looking at replacing ageing warships by introducing new ones, according to the Parliamentary Standing Committee on Defence. This includes the development of seven Project 17A stealth frigates and the construction of four Project 15B Visakhapatnam-class destroyers.

The Indian Air Force (IAF) currently has 33 fighter jet squadrons. Each of these has 18-20 aircraft. But India needs 45 squadrons to counter a “two-front collusive threat” from Pakistan and China, according to the Parliamentary Standing Committee on Defence. The government has authorised a squadron strength of 42 squadrons, the committee noted.

However, the actual number of IAF fighter squadrons in 2029 and 2032 could be higher, the committee noted. That’s because the IAF will commission at least 36 Dassault Rafale (two squadrons) and 123 indigenous Hindustan Aeronautics Limited (HAL) Tejas (approximately six to seven squadrons). Then there are the Sukhoi Su-30MKI fighter jets previously contracted and currently being licence manufactured at HAL.

However, these would not do enough to reduce the capability gap the IAF is facing. Hence, the force has expressed an interest in acquiring 114 new single-engine fighter jets that will service six squadrons.

These fighter jets are to be manufactured in India under the Modi government’s Strategic Partnership policy which entails foreign aircraft makers to tie up with Indian companies to manufacture the warplanes in India.

The Swedish company Saab has tied up with India’s Adani group to pitch the Saab Gripen warplane for this purpose. Meanwhile, the US aerospace major Lockheed Martin has forged a partnership with Tata Advanced Systems Ltd to pitch Lockheed’s F-16 to India.

The missile has a range of 1,000-km and can deliver both nuclear and conventional payloads deep inside enemy territories and once inducted, significantly enhance India’s military capabilities.

On 22 November, 2017, India successfully test-fired a 300 km-ranged BrahMos supersonic cruise missile from a modified IAF Sukhoi Su-30MKI fighter jet. The Su-30MKI has an unrefueled range of 3,000 km. And by deploying the short-ranged BrahMos from the Su-30MKI, the effective range of the high-precision missile increases exponentially.

BrahMos travels at a speed of Mach 2.8 (nearly three times the speed of sound) and are purportedly impossible to intercept.