Despite lockdown, volunteers and Indian consulate in Dubai ensure Indians who died in UAE are flown home; eight bodies brought back since 22 March

At a time when the living are grounded, the dead are flying back home to India from the UAE, bringing closure to their anxious family members.

While India suspended the entry of commercial passenger flights from 22 March, and the UAE closed its airspace from 26 March in a bid to contain the COVID-19 pandemic, even under these circumstances, the dead bodies of Indian expats are being repatriated, slowly but surely. Manu Abraham, an Indian worker, who died in the UAE was repatriated despite lockdown. Image courtesy: Ronak Kotecha

Since 22 March, about 17 cases of natural deaths have been registered with the Indian consulate in Dubai. Thanks to a few selfless social workers and help from the Office of Consulate General of India (CGI) in Dubai, many of these bodies have already been repatriated.

‘Guardian of the dead’

Leading among them is one man – 46-year-old Ashraf Thamarassery, a social worker, who has so far repatriated more than 5,600 bodies across 38 countries. He has been doing this for the past 20 years.

Ashraf, often described as the ‘guardian of the dead’, shot to fame in 2018 when he was quite instrumental in repatriating actress Sridevi’s body to India.

Like in most countries, the repatriation process in the UAE is also a long procedural loop involving ten different departments with multiple documentation. Ashraf, who owns a small business in a much lesser known Emirate called Ajman, dedicates all his time to help grieving families of the deceased to get their loved ones back from the UAE.

"Since the lockdown in India, we have managed to dispatch eight bodies through cargo planes of Emirates Airlines and Gulf Air, but nine bodies are still left,” says Ashraf as he continues to toil over the challenges of accomplishing this task in these difficult times.

Since 26 March, the UAE government has implemented a National Sterilization Drive from 6 am to 8 pm until 5 April, imposing heavy fines on violators.

But for Ashraf, the hardest part is dealing with the families back home when it involves the death of a youth.

Among the bodies, Ashraf repatriated during the lockdown in India, were two young electrical engineers working in Dubai. Twenty-six-year-old Vishnu Raj, who died of a cardiac arrest and 27-year-old Manu Abraham whose cause of death is mentioned as 'unspecified injuries to head'.

"All of the deceased are men and none have died due to Coronavirus,” confirms Ashraf adding that a 62-year-old Keralite, who was diagnosed with COVID-19 will be cremated in the UAE itself, as per the protocol mandated by UAE’s Ministry of Health and Prevention. 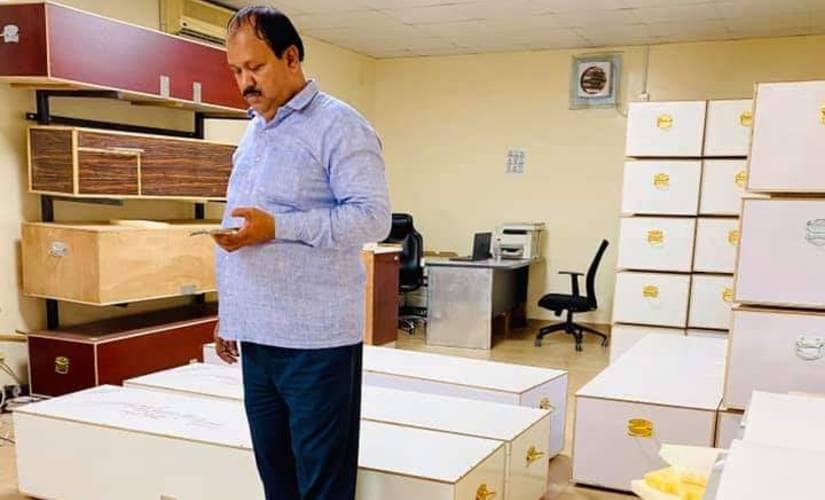 Ashraf Thamarassery is a registered volunteer who has helped repatriate bodies of thousands of Indian workers who died in the UAE. Image courtesy: Ronak Kotecha

CGI to the rescue

Neeraj Agrawal, the Press Consul at the CGI in Dubai clarified that Air India does not charge for taking the body if the CGI is sending it, however, the local charges such as embalming, casket, documentation and other logistical costs are borne by the consulate.

"We use the Indian Committee Welfare Fund, which was set up in 2009 to assist overseas Indian nationals in times of distress and emergency in the ‘most deserving cases’," says Neeraj, adding that right now the challenge is more severe at the receiving end since India is under total lockdown.

Interestingly, the bodies that have been repatriated since the lockdown in India have been only to Kerala ⁠— a state that already has well-oiled machinery in place to receive the bodies, even at this time. The fact that there are more than a million Keralites living in the UAE also merits this kind of support back home.

It also helps that most of the social workers like Ashraf hail from Kerala or other south Indian states. However, Neeraj says since there is no obligation for Indians to intimate the CGI in case the cremation is being done in the UAE itself, there are deaths of Indians here that he would not be aware of.

According to Neeraj, the CGI records four deaths daily on average, but since the lockdown in India that average has gone down.

“This is a good thing, but if there have been more deaths, we request the Indian community to inform us so we can help,” he says.