New Delhi: Delhi's air quality remained in the 'very poor' category on Thursday due to "unfavourable meteorological conditions" that slowed down dispersion of pollutants, authorities said. 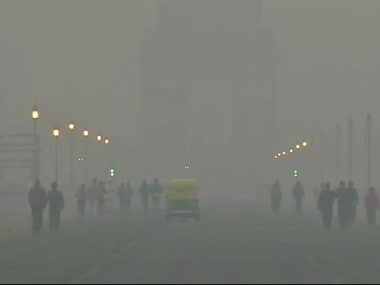 The level of PM2.5 — particles in the air with a diameter of less than 2.5 micrometres — was recorded at 206 and the PM10 level was recorded at 360, it said. In NCR, Ghaziabad, Faridabad and Noida recorded 'very poor' air quality while Gurgaon fell into the 'poor' category, the CPCB data showed.

According to the Indian Institute of Tropical Meteorology, the wind speed and ventilation index are "extremely unfavourable" for dispersion of pollutants. Ventilation index determines how fast pollutants can get dispersed.

The ventilation index of around 6,000 sqm/second gets rid of pollutants, but it fell to 2,500 sqm/second on Thursday in the city. According to the Centre-run System of Air Quality and Weather Forecasting (SAFAR), the air quality is 'very poor' and likely to improve due to a slight increase in the wind speed. It will, however, remain in 'very poor' category for the next two days.

"Due to cold front up in the north, the wind speed has increased, so a decline (in pollution levels) is expected. However, at the time of withdrawal (of high wind speed) after two to three days, a lot of moisture may enter Delhi which is not favourable for the air quality. The contribution from stubble burning is nil," the SAFAR said.