On the western fringes of the national capital that border Haryana, lies an urban village called Ghummanhera. Somewhere in the depths of a barren field of that village stands the 19-acre Acharya Sushil Muni Gosadan, which, as per Delhi government, has the capacity to house 4,142 cows. Here, more than 30 cows died within a week. The gosadan or cow shelter is one of the five such establishments that receive government aid: Rs 20 per cow per day from the Delhi government and the same amount from the Municipal Corporation of Delhi.

As required under Section 10 of the Delhi Agricultural Cattle Preservation Act, 1994, the government of Delhi, through non-governmental organisation, had established gosadans for ‘the reception, maintenance and care of agricultural cattle’. So, these are structures that provide shelter to cows and bulls that are dumped by private owners either because the animals are injured or have stopped producing milk. Largely, the animals given shelter are economically undesirable. These are merely procuring agents for unfit and abandoned cows, and not milk-producing or profit-generating establishments. 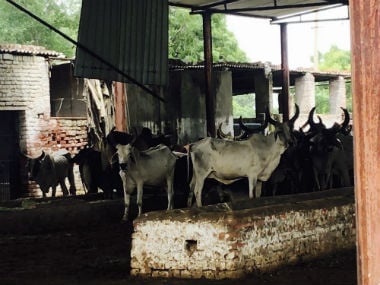 The Ghummanhera gosadan, where more than 30 cows died last week, hasn’t accepted a single cow from the MCD in the last two years but still receives government aid.

At Ghummanhera's gosadan, a caretaker who identified himself as Vinod said that a local who was politically connected took autonomous charge of the operations and banned the entry of the Delhi government’s doctors or the MCD personnel. “We have not transported cattle to the gosadan in nearly two years. There was a management dispute and we have no clarity on which authority is running the shelter,” said Dr Hemant Kaushik, Deputy Director, South Delhi Municipal Corporation.

The scene at the Ghummanhera gosadan was tense. There was a long line of trucks in which 1,000 cows were being transported to the Dabar Hare Krishna Gaushala, Surhera, Najafgarh, which is the largest government-aided cow shelter in the capital. When Firstpost hit ground zero, there were cow carcasses covered with green cloth and placed on wooden planks and some others were being buried near the gate of the shelter.

A senior veterinary doctor of the Delhi government, who wished to remain anonymous, was inspecting batches of animals before they boarded trucks. “There’s a team of 12 vets plus three post-mortem specialists from nearly 30 animal medical establishments who, in light of this incident, have left all their work to dedicate themselves to cow shelters that were being mismanaged for two full years. Why wasn’t any action being taken against it if the MCD and Delhi government doctors were being denied entry into its premises for months on end?"

"This amounts to cow slaughter but because cow deaths take place due to administrative laxity over a period of time, they rarely get as much attention,” he alleged.

The 16-acre Manav Gau Sadan at Rewla Khanpur, another one of the five government-aided shelters that has the capacity to shelter 3,488 cattle, had filed a case against the Delhi government because its license was cancelled on grounds of inadequate facilities. Because of a court stay order four years ago, the cows cannot be transported to another shelter. But nor can the Manav Gau Sadan accept new cows brought in by the MCD. On what basis the state government decides to give the contract of such gau sadans needs to be ascertained, especially when there is a history of inefficient operation or in the case of the latter, no operation at all. The Delhi government and the MCD are spending Rs 14,600 per cow per year on these centres.

He added that the Cantonment Board also occasionally brings in cattle gone astray in the cantonment region. “The health state of the cattle that’s brought here is deplorable. Stomachs are full of polythene or legs are injured. The burden of cows is increasing day by day. Although on paper we have a good capacity (24 acres), the animals need space, more so if they are diseased and need to be quarantined,” Satish said.

He clarified that the shelter has nearly 2,800 animals and only generates 40-50 litres of milk. The revenue from the sale of cow dung was not more than Rs 5 lakh a year. The carcasses are collected by the East Delhi Municipal Corporation and taken to slaughter houses in Ghazipur. Krishan Yadav, the main founder of this particular gosadan, alleged that he hasn’t received funding from the MCD in over two years and even the Delhi government funding hasn’t come in since December.

Dr Rakesh Singh, director, Animal Husbandry, Delhi Government, located the root cause of the problem in the inability to identify owners of stray cows. “There is no rule to stamp cows with a livestock registration number. Those who do it, do it for their own convenience but there’s no binding law around it. Once a cow is left to stray, there’s absolutely no way to find out who its caretaker is,” he stated.

Last year, advocate SN Bhardwaj approached the Delhi High Court seeking action against such cow owners as per provisions of the Prevention of Cruelty to Animals Act 1960. “A large number of cows are found eating garbage not only on Delhi roads but also across the country. Animal Welfare Board of India, being the statutory authority and legally bound to perform its duty in accordance with Central Act, Prevention of Cruelty to Animals Act, failed to discharge its duty,” the PIL cited.

It also sought the appointment of a high-powered commission headed by a former Chief Justice of India to suggest ways for protection of cows. It also appealed to the court to direct authorities to allocate more land for cow shelters.

Oddly, for conducting evaluation study of the scheme "Setting up of 10 Gausadans”, a field survey was conducted during September and October 1999 for seven gosadans and five gaushalas. It was observed that most of the gosadans were running under extreme financial hardship. A number of them also expressed their inability to improve gosadans due to economic crunch.

Nearly two decades later, and after multiple governments in power both in the Centre, in Delhi and in the MCD, the situation remains quite the same. The survey also assessed the five privately-run gaushalas where it was noticed that their financial condition is far better than the gosadans run by NGOs.

The prime reason for this is that they receive greater donations as compared to gosadans run by NGOs. The high mortality rate in NGO’s gosadans possibly hinder the desire to donate among the public. “People feel more comfortable donating to private cow shelters because they feel only sick cows dumped by others come to us and that we are already shielded by generous government aid,” added Satish, the caretaker at Surhera. 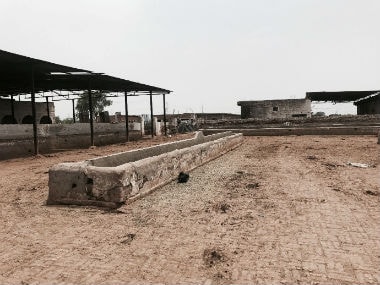 There is a need to re-model state-funded cow shelters with adequate space to quarantine sick cows and have multiple feeding areas.

Half a year ago, the South Delhi Municipal Corporation (SDMC) floated a plan to generate electricity from garbage, for which it proposed to set up a waste-to-energy plant on 50 acres of land at Tehkhand area in South east Delhi.

The biogas plants were proposed to be set up at two cow shelters — Manav Gosadan and the Ghummanhera Gosadan — along with two dairies. Till today, neither of the gaushalas have these bio-treatment plants that could have generated electricity from cow dung. RPS Tyagi of the SDMC told Firstpost that the tender is ready and once the engineering department finishes its work, the plants will open up. But the staff at the gosadans must also be skilled and willing to operate the plants along with the municipal authorities.

A Central Pollution Control Board report 2015 stated that Delhi generates 689.52 tonne of plastic waste every single day and the MCD finds new cows astray on the city’s streets every day. In the context of the failure of administrative mechanisms, the death of cows in state-funded shelters arouses neither shock nor sorrow.