The execution of Yakub Memon, one of the accused in 1993 Bombay bombings, last year ignited the debate on ‘capital punishment’ with pro- and anti-death punishment brigades making ferocious arguments to prove their points. While arguments against Yakub’s hanging addressed specific procedural facts of the case, it also brought forth the debate on the desirability of the death sentence as we call it in India.

The massive unrest that was witnessed on the JNU campus over the last three months was an offshoot of long resentment of a group of students over the execution of Parliament attack convict Afzal Guru. At the heart of it, however, was the objection to the death sentence in principle.

In this backdrop, ‘Death Penalty India Report’ released on Friday by the Center of Death Penalty at National Law University, Delhi assumes great significance as it raises serious questions on the criminal justice system in the country 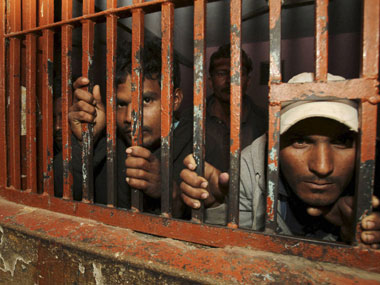 Anup Surendranath, Director, Centre on the Death Penalty National Law University, while presenting the report said that the report tends to reflect upon “this unique and harshest punishment in the criminal justice system in India as it is administered today” and in doing so tends to make serious efforts to find the answer to these questions: What is the state of the criminal justice system that we use to sentence people to death? How do prisons treat the death row prisoners? What kind of legal assistance do they get? What kind of evidence is used in these cases? And what are the sentencing practices in these cases?

“And in that sense the idea of the report is to introduce the aspects the administration of the death penalty that are just absent from the conversation,” said Surendranath. “And I think by the virtue of being the most unique and harshest of punishment available the compliance and fidelity to constitutional protections and the rule of law must be at its highest. And that is what we were testing. What we see is the complete breakdown of the criminal justice system,” he added.

“Rampant narrative of custodial tortures is what we heard while interviewing these prisoners. Most basic constitutional procedures are not followed by the police. Eighty percent of prisoners told us that they suffered in police custody,” said Surendranath.

This is what the report states: “The forms of torture described by the prisoners often left permanent effects on their health and bodily integrity. Permanent loss of eyesight and hearing, irreparable damage to limbs and other bodily parts, spinal injuries are some of the lasting effects of custodial violence that prisoners complained of. Amongst prisoners subject to intense electric shocks over significant periods in police custody, we often heard about severe recurring headaches. One prisoner claimed that he had developed epilepsy after being subject to prolonged electric shocks in police custody. The inability to eat any food due to intense pain and swelling, urinating blood, fractures in different parts of the body, bleeding from the mouth, ears or anus were other debilitating consequences that prisoners suffered after being subjected to custodial violence.”

According to the report, 64.5 percent prisoners said they were not produced before the magistrate within 24 hours. “Out of the 258 prisoners who spoke about production before a Magistrate, 166 said that they were not produced before a Magistrate within 24 hours. Narratives of police custody for periods up to seven days, which sometimes even extended to several weeks or months, were documented.” Ninety-seven percent of the interviewed prisoners did not have lawyers when the police interrogated them. Even while being produced before the magistrate 90 percent of them were not represented by a lawyer.

Commenting on this aspect, Surendranath said, “These are questions that do not enter death penalty adjudication. Courts do not seem to grapple with the reality how these cases come to them, how these cases are carried out and what are the procedural violations. If you have to impose this punishment, I truly believe that it must have absolute gold standard of compliance. But you are so far away from basic procedural compliance with constitutional and legislative safeguards.”

Nine persons sentenced to death by trial courts in the past 15 years were found to be juveniles by the high courts. Determining the age of the convict becomes very difficult as most have had no documented proof owing to their socio-economic background and bone density test is not considered very authentic.

Referring to one such case, the report states, “Chiranjiv, a prisoner sentenced to death in 2013 for the rape and murder of a minor, claimed that he was a juvenile at the time of the incident. It must be noted that this aspect was not considered by the trial court in its judgment and neither is it known if this was raised by Chiranjiv’s lawyer. Chiranjiv had studied till the tenth standard and thereafter, was working in a brick kiln. After the incident, his family severed all contact with Chiranjiv, and only after he was sentenced to death, did they begin to visit him and provide support. During his interview, he said that he was hopeful that his sentence would be commuted by the High Court, and otherwise he was ready to go to every forum available to him, including the Supreme Court, and thereafter the Governor and President. More than anything, he longed to be with his family. Chiranjiv committed suicide in prison a few months after we met him. He was only 20 years old”.

Talking about a case where two brothers were convicted and claimed to be juvenile, Surendranath said that while the elder one had gone to school for few months and had documents to prove his age the younger brother had none. In another case the prisoner who had spent 19 years in jail, 16 years on death row, was found to be juvenile after Centre on the Death Penalty took initiative and after much efforts could find the documents to prove his age. But he termed it as ‘pure luck’ which is not possible in most of the cases.

The report states that lack of competent legal representation and the minimalistic (bordering on non-existent) sentencing practices are of particular concern. “Very often the concern about the quality of legal representation has been couched in terms of inadequacies of the legal aid system. More than 60 percent of the prisoners sentenced to death had private lawyers in the trial court and high courts. It must be a cause for extreme concern that prisoners and their families wanted to avoid the legal aid system at all costs and therefore went to great lengths to ensure that they had private legal representation,” reads the report.

It adds, “While this deepened their economic vulnerability, it did not ensure access to competent legal representation. It is evident that the problem of legal representation in capital cases cannot be meaningfully characterised as one of legal aid against private representation. The concern with competent legal representation in capital cases is much broader and cannot be restricted to just legal aid lawyers. This was perhaps most amplified at the stage of sentencing where the sentencing hearings seem to be conducted merely to meet the technical requirements of the law and very little else. Given the paucity of relevant sentencing information being brought before the courts, it is not surprising that the sentencing parts in judgments tend to focus almost exclusively on the nature of the crime”.

Victimisation of the families of the convicts

The report also tries to bring out the fact that there are very serious and real social costs to the experience that prisoners and their families go through. “The social and economic consequences along with debilitating forms of ostracisation that families face heighten their vulnerability, driving them deeper into destitution.”

“The faith of the families in the criminal justice system is further eroded as the case moves into the realm of the appellate courts and the mercy jurisdiction. The irony of the legal system is such that the closer a prisoner gets to execution, the administration of justice gets more opaque from the perspective of families. It is difficult for the families of prisoners to get any substantial information about the proceedings in the High Court and that problem only worsens when the case moves to the Supreme Court. There is no real protection against such multiple axes of vulnerability and the tendency to see the suffering of prisoner families as morally acceptable collateral costs must be resisted,” reads the report.

Raising serious questions on the legal aid assistance provided to the accused persons the report states, “Defense lawyers hardly have any information about the individual they are representing that can be meaningfully used in sentencing hearings. As mentioned earlier, the very idea of a sentencing hearing is to consider all circumstances of the individual beyond the crime in question. A comprehensive understanding of the prisoner’s background requires an extensive interaction by the lawyer. Unfortunately, that is severely lacking in the manner in which the prisoners in this study were represented. It is a combination of the inability of the accused to afford quality representation along with structural issues regarding the nature of criminal defense in India”.

Out of the 225 prisoners who spoke about their presence during the trial proceedings, only 57 (25.3 percent) said that they were present during all hearings. The responses of the remaining prisoners varied from attending the majority of proceedings to being present for the examination of a few witnesses. Another practice was taking the prisoners to the court premises and then confining them in the court lock-up, without actually producing them in the courtroom.

No talks of reformation and rehabilitation

The Supreme Court in Bachan Singh v. State of Punjab, while upholding the constitutionality of the death penalty, placed significant emphasis on reformation. However, according to the report this is not addressed in any substantive manner.

Accused not even provided with proper documents

According to the report, while section 207 of the CrPC provides that the Magistrate shall, without delay, furnish the accused with a copy of the chargesheet and other documents such as the first information report, statements made by persons which the police may seek to examine as witnesses and judicial confessions before the Magistrate, it is blatantly violated. “Out of the 255 prisoners who spoke about receiving the chargesheet, 60 said that they never received a copy of the chargesheet. Among the 195 prisoners who did receive a copy, there was a widespread concern that they received it after the commencement of the trial, or after the pronouncement of the trial court judgment. Further, it was a challenge to understand the language in which the chargesheet was written while others could not read it at all as they were illiterate,” it says.

Not even informed about the ground of arrest

According to the report, of the 219 prisoners who spoke about being informed about the ground of arrest, 136 said that they were not informed about the same. Common practices included asking individuals to accompany the police officials for false and often vague reasons such as ‘answering a few questions’ or ‘signing some documents’.

There were 385 prisoners under the sentence of death during the course of this project. 373 of those prisoners across 20 states and one Union Territory (Andaman & Nicobar Islands) are a part of this study (Graphic 1).1 The remaining 12 prisoners who do not form part of this study were sentenced to death in Tamil Nadu. Despite our numerous attempts, the Government of Tamil Nadu did not grant us permission to conduct prison interviews, citing lack of security clearance from ‘agencies’ in Delhi. We were never informed who these ‘agencies’ were.