Mediocrity is a currency. We might sneer at it, but it could well be the norm and we do not want to acknowledge that, which is why we put down the lone wolf: genius makes us nervous

When I was working in the Illustrated Weekly as a member of the Khushwant Singh rat pack in the early seventies, I interviewed JRD Tata at the famous Sea Lounge and cheekily asked him if I could join the Tata Administrative Service. He organised a meeting for me with one of his top people but I cannot remember who exactly it was. At the meeting, this executive asked me whom or what I believed was my idea of the worst combination in a staff member—at any level.

I said, sincerity and mediocrity —a deadly combination. You cannot beat it; it is insidious like the flu and you cannot get rid of it. It is a corporate conspiracy that wins every time. Pigeons flocking together and you want to be an eagle and they won’t let you fly high; no they won’t. Sincerity is a weapon. Come on time, stay late, always be there, willing, eager even trying. He is likeable, he is eager, he is always ready to pick up after, the first to volunteer, yes sir more than three bags full sir. But he doesn’t have it in him. The sandwich has no jam. He/she is doing the best they can but the best is not enough and because of that canopy of A+ for sincerity you, the boss, don’t get rid of them. You keep building the pyramid of average and below-average, lowering the bar because, paradoxically, while each one of them may not get the work done or raise the standards, they manage to deliver just enough to keep the wheels moving. The power of the pack generates enough results to give the illusion of teamwork succeeding.

And it comes without the risks created by the high-flyers, whose brilliance brings with it its own set of problems. Overreaching, having the vision but not the team, being so smart that no one follows the solo drummer. Finally, he is left out on a limb, victim of his own incandescent genius. The plodder plods on. We have all dealt with this combination. Nice people, easily interchangeable, their lack of capability interpreted through our sieves as decent, trustworthy, industrious, that nice chap, let him be, he means well—if only there were bonuses for being nice.

Maybe, mediocrity is a currency. We might sneer at it, but it could well be the norm and we do not want to acknowledge that. Which is the single-largest reason we always put down the lone wolf: the extraordinary makes us nervous. Maybe, it is the speed of our world to be average, don’t even peep out of the box let alone think—all those clichés suddenly having relevance. Survive by being common and part of the herd. We don’t need geniuses. After all, everything is made by the lowest bidder. Think about that. 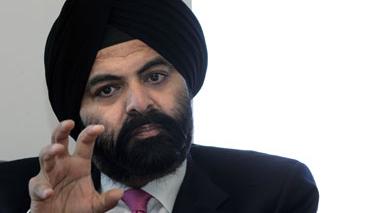 Mastercard CEO Ajay Banga to step down in 2021; chief product officer Michael Miebach to take over