Darjeeling: Fresh violence on Sunday erupted in Darjeeling hills prompting the state government to call the army back on the streets as Gorkhaland supporters torched a police outpost, a toy train station and clashed with the police at two places.

The Gorkha Janmukti Morcha (GJM), spearheading the agitation for a separate state carved out of West Bengal, claimed that two youths were killed in police firing and rejected chief minister Mamata Banerjee's offer of talks. 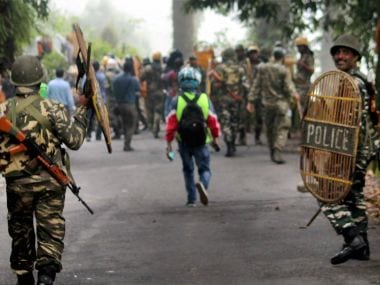 The police, however, said they did not have any report of firing.

Banerjee appealed for peace and said that the government was ready for talks with the hill parties, but peace has to be restored first.

In a statement on Sunday, the GJM, however, said the doors for talks with Banerjee and the state government are "closed forever".

It said it was willing to holds with the Centre on the issue of Gorkhaland. "If the Centre calls for talks on Gorkhaland, we will go," it said.

The GJM also said while the Basirhat riots had drawn the attention of national parties, the month-long unrest in Darjeeling had failed to attract them.

"We sincerely ask the leaders of the political parties are we in India," the statement said.

The police burst teargas shells and baton-charged activists of the GJM and the Gorkha National Liberation Front (GNLF) who attacked the security personnel at Sonada and Chawkbazar in the hills.

Two columns of the army comprising around 100 personnel were deployed at Sonada and Darjeeling in the wake of fresh violence, defence sources said.

The chief minister said, "The government has shown enough restraint in the interest of the people of the hills."

She accused the Centre of "deliberate and total non-cooperation" and alleged that it's refusal to send CRPF personnel, as demanded by the state government, had led to the present situation in the Darjeeling hills where the indefinite shutdown entered day 24.

In New Delhi, Union home ministry sources said 11 companies of paramilitary force personnnel were sent to Darjeeling by the Centre, including one company consisting of women.

The West Bengal government has its own security forces like the Eastern Frontier Rifles and the state armed police and both have several battalions, they said, adding that it was not deploying these forces and instead blaming the central government.

GNLF spokesperson Neeraj Zimba claimed that a youth Tashi Bhutia was shot dead by the security forces last night when he had ventured out to purchase medicines at Sonada.

But a police officer said, "We don't have any report of police firing as of now. We are looking into the incident. We can give you details later."

Inspector General of Police (IGP) Javed Shamim, when asked about the firing said, "It will be known only after the inquiry."

The GJM and other hill parties have lodged a police complaint accusing the force of killing the youth.

"The youth was killed by the police without any reason. His body has bullet injuries. We demand that the policemen involved be punished," GJM leader Binay Tamang said.

As news of the death spread, hundreds of Gorkhaland supporters came out on the streets and raised slogans against alleged "police atrocities".

They clashed with the police and set on fire a police outpost at Sonada and the toy train station of the Darjeeling-Himalayan Railways, a UNESCO World Heritage site.

A GJM leader claimed that another youth identified as Suraj Sundas was killed in police firing during clashes between the police and the protestors at Chowkbazar area here during the day.

The police, however, denied the charge.

The GJM leader claimed that Suraj was caught in the midst of the clashes and was killed when the police fired on the protesters.

The Centre had said yesterday that it was keen to hold tripartite talks with the GJM and the West Bengal government to end the agitation.

With food supply severely hit due to the indefinite strike, the GJM and various NGOs distributed food amongst the people.

The police and the security forces patrolled the streets and kept a vigil on the entry and exit routes.