Prime Minister Narendra Modi and Congress president Rahul Gandhi will be in Chhattisgarh on Friday to campaign for the first phase of the Assembly elections in the state. Modi will address a rally in Bastar district's headquarters, Jagdalpur, while Gandhi will tour the state for two days during which he will address five rallies and hold a roadshow in Chief Minister Raman Singh's constituency, Rajnandgaon. The prime minister is scheduled to arrive at Raipur airport at 11.20 am Friday and then take a helicopter to Jagdalpur. Following the rally, he will leave for Raipur at 2 pm and then return to Delhi, a state BJP spokesperson said on Thursday.

Gandhi will take part in a rally in Pakhanjore town of Kanker district at noon, followed by public meetings in Rajnandgaon district's Khairgarh and Dongargarh towns, and a roadshow in Rajnandgaon, said Shailesh Nitin Trivedi, head of Congress state communication wing. The campaigning for the first phase will end on Saturday. The first phase on 12 November will see 18 seats in eight Naxal-affected districts go to polls. 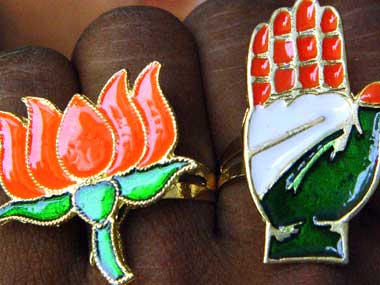 TDP chief Chandrababu Naidu is set to meet DMK chief Stalin on Friday as he looks to create a united opposition against the BJP. Naidu, on Thursday, held talks with former prime minister HD Deve Gowda and Karnataka counterpart HD Kumaraswamy and said it was necessary for the Opposition to unite against BJP to save the country and its institutions from destruction. Aiming to forge an anti-BJP front ahead of the 2019 Lok Sabha polls, Naidu alleged that every institution, including CBI and RBI, had been destroyed by the BJP-led NDA government. "It is our responsibility to join hands together to save and protect this great nation and also save democracy and the Constitution," he told reporters after meeting Deve Gowda and Kumaraswamy. Naidu also said that he has been in touch with other leaders, including SP’s Akhilesh Yadav, BSP’s Mayawati and West Bengal chief minister Mamata Banerjee.

Two years of Demonetisation: Congress to stage protest in front Of RBI Offices

The Congress has called for a nationwide protest on Friday against the "complete demolition of the Indian economy by this Tughlaqian decree of demonetisation". The party on Thursday launched a multi-pronged attack on the Modi government over demonetisation, with former prime minister Manmohan Singh saying the "scars and wounds" it caused are getting more visible with time and party chief Rahul Gandhi describing the measure as a carefully planned "criminal financial scam". In a scathing assessment of the demonetisation exercise, Singh said that 8 November (Thursday) is a day to remember how "economic misadventures" can roil the nation.

Four civilians and a CISF jawan were killed when suspected Naxals blew up a bus with an improvised explosive device (IED) in Chhattisgarh's Dantewada district on Thursday, four days ahead of the first phase of Assembly polls in the state, police said. Two personnel of the Central Industrial Security Force (CISF) were also injured in the explosion, the third Naxal attack in 15 days in the poll-bound state. The attack comes before Modi's scheduled visit on Friday to Jagdalpur district, about 100 kilometres from Dantewada, to campaign for the BJP. The IED explosion took place in a hilly area in Bacheli when the CISF personnel, belonging to 502nd battalion, were returning to their camp in Akashnagar area after purchasing groceries from a local market, Dantewada Superintendent of Police Abhishek Pallava told PTI.

Congress has decided to field former Union minister Arun Yadav against Madhya Pradesh chief minister Shivraj Singh Chouhan. Arun, who became the state Congress chief in January 2014, served as an MP from 2007 to 2009 and from 2009 to 2014. He had also served as the Union minister of state, agriculture and food processing industries in the erstwhile Congress-led UPA government. Being the son of a deputy chief minister hailed as the most important farmer leader at one point of time may give Arun the opportunity to present himself as a suitable alternative to Chouhan. Madhya Pradesh goes to polls on 28 November and votes will be counted on 11 December.

A US Marine veteran dressed in black sprayed bullets inside a crowded dance bar popular with college students on Wednesday night, killing at least 12 people, including a police officer, in Thousand Oaks city in California, in one of the "horrific" mass shooting incidents in the US. The gunman, who also injured nearly two dozen others, was found dead inside the Borderline Bar and Grill on the outskirts of Los Angeles. Ventura County Sheriff Geoff Dean identified the gunman as 28-year-old Ian David Long, a US Marine Corps veteran, who used a .45 caliber Glock handgun during the shooting. Long, who shot himself, was dead when officers made entry into the bar, Dean said, as he described the shooting incident as "horrific." He said the motive of the shooter is still unclear. He was known to authorities for minor crimes.

Following employee protests and a global walkout last week, Google CEO Sundar Pichai issued a memo outlining changes to the company’s sexual harassment and assault policies. As per the memo, arbitration is no longer an essential part of the resolution process in sexual harassment cases. Interestingly, the memo also states that leaders at the company "will be expected to create teams, events, offsites and environments in which excessive alcohol consumption is strongly discouraged".

The 2018 edition will be the sixth Women's T20 World Cup that will be played in the Caribbean from 9 to 24 November. Harmanpreet Kaur-led Indian side, kick off the tournament against World No. 2 New Zealand at the Providence Stadium in Guyana on Friday.