Punjab minister Navjot Singh Sidhu's remark on Amarinder Singh's seniority and the controversy over visiting Pakistan during the Kartarpur Corridor inauguration continued to rock the state political circles. More Punjab ministers condemned Sidhu over his jibe at the Punjab chief minister demanding that he apologises to the chief minister and "learns how to respect elders", even as the former cricketer's wife said his statement was being twisted and taken out of context. 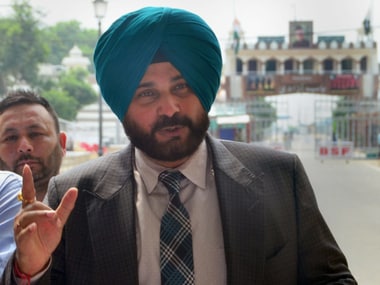 On Saturday, three ministers — Rural Development and Panchayat minister Tript Rajinder Singh Bajwa, Revenue and Rehabilitation minister Sukhbinder Singh Sarkaria and Sports Minister Rana Gurmeet Singh Sodhi — had called for Sidhu's resignation from the state cabinet.  Whereas on Sunday, state's Women and Child Development and Transport Minister Aruna Chaudhary said that Sidhu's remark was "unfortunate" and "uncalled for". "Most Amarinder loyalists are keen on raising the issue in the cabinet meeting," said another minister.

Last week, Sidhu had mocked Amarinder Singh in Hyderabad when reporters had asked him about going to Pakistan, to attend the groundbreaking ceremony for the Kartarpur corridor, despite the Punjab chief minister's disapproval. "Which captain are you talking about? Oh! Captain Amarinder Singh. He is an Army Captain, my captain is Rahul Gandhi. His captain is also Rahul Gandhi," Sidhu had said.

The row over Sidhu's second trip to Pakistan in three months escalated even as he backtracked on his claim that Congress president Rahul Gandhi was involved in his decision to attend the ceremony. "Get your facts right before you distort them, Rahul Gandhi Ji never asked me to go to Pakistan. The whole world knows I went to Pakistan on Prime Minister Imran Khan's personal invite," Sidhu tweeted on Saturday.  Meanwhile, Sidhu's wife and former BJP MLA Navjot Kaur Sidhu also said that "his heart is clean" and his remarks were being "twisted" and "taken out of context". "Since Navjot and I joined the Congress, we always showed full respect towards Capt Sahib (Amarinder)," she said.

However, BJP too took potshots at Sidhu, dubbing him a "man of U-turns". "When Sidhu was in the BJP, he hailed the contribution of Atal Bihari Vajpayee, LK Advani, Narendra Modi, Arun Jaitley. He used to ridicule Manmohan Singh by terming him 'Mouni Baba'. He is a man of U-turns. It seems his lust for power would end with accepting Pakistan Prime Minister Imran Khan as his Captain," BJP national secretary Tarun Chugh said. "He should be sacked immediately."

Narendra Modi to campaign in Jodhpur and Hyderabad:

The prime minister will address a public meeting at Jodhpur and an election rally at the Lal Bahadur Shastri RPT Shastri Stadium in Hyderabad Monday to give a fillip to BJPs poll campaign.
This is Modi's second visit to poll-bound Telangana. He had addressed meetings at Nizamabad and Mahabubnagar last week.

Rahul, who will campaign in Telangana on Monday, will start from a public meeting in the Gadwal district. Post that, he will address another public meeting in the Vikarabad district before moving on to Hyderabad to attend two corner meetings in Jubilee Hills and Kukatpally.  On 4 December, the Congress president will return to Rajasthan for poll tour.

Promoted by the United Nations, the International Day of Persons with Disability is observed annually on 3 December since 1992. The day is observed with a focus to encourage an understanding of disability issues and gather support for the dignity, rights, and welfare of the disabled persons. It also seeks to spread awareness about the benefits from the integration of persons with disability in the political, social, economic and cultural aspects of life.

The theme for this year's celebrations is focused on empowering people with disabilities for an inclusive, equitable and sustainable development as a part of the '2030 Agenda for Sustainable Development'.

Jammu and Kashmir Governor Satya Pal Malik on Sunday clarified that his administration was not considering any changes to the legislation governing permanent resident certificates (PRCs) in the state, after NC leader Omar Abdullah said his party would oppose any move aimed at changing the act. "At the outset, I would like to mention that the government is not making or even considering any changes to the act governing permanent resident certificates in the state. It is an integral part of the legal structure of Jammu and Kashmir and there is no attempt whatsoever to tamper with this law," Malik said in his letter addressed to Omar.

Earlier on Sunday, Omar had written to the governor, saying that the National Conference (NC) would oppose any move to change the procedure to grant PRCs in the state. In response to his letter, Malik replied: "As a senior political leader, the governor said, "I would request you not to pay heed to such frivolous and unfounded reports. In fact, you have an obligation to dispel rather than promote unnecessary mistrust among the people and are always welcome to discuss issues with me, which you have been doing once in a while."

Article 35A of the Constitution empowers the Jammu and Kashmir Assembly to define 'permanent residents' of the state who are eligible for special rights and privileges, which the legislature can provide. The Supreme Court is currently hearing a bunch of petitions seeking abrogation of Article 35A, which was added by a presidential order in 1954 through Article 370 of the Constitution.

Omar also raked up the fax machine issue again. "I'm trying to fax a letter to the Jammu and Kashmir governor but the fax machine still isn't working. The operator who answered the phone says the fax operator is on holiday as it's a Sunday. Will attempt again tomorrow in the meantime am forced to put the letter out through social media," he had tweeted. To which Malik responded by saying, "Incidentally my fax machine was working and your fax was received and confirmed by my office while you were tweeting that it was not functional."

Petrol and diesel prices have been dropping daily for the past two weeks. On Sunday, the petrol price was cut by 40 paise across metros in the country. In Delhi, petrol was priced at Rs 72.23, Mumbai Rs 77.80, Chennai Rs 74.94 and in Kolkata Rs 74.25 per litre, according to data available on Indian Oil Corporation website.

Petrol and diesel prices are dropping continuously as the crude oil prices are falling globally. Brent Crude futures were trading below the $60 per barrel mark on Friday and closed at $59.46.

The Organization of the Petroleum Exporting Countries, of which Saudi Arabia is a key member, and Russia and other leading oil producers will meet in Vienna on 6-7 December to discuss the oil market, as prices have been declining due to oversupply. Riyadh has suggested OPEC and its allies reduce output by 1 million barrels per day from January 2019 to stem the price falls.

Guillermo del Toro to give political twist to Pinocchio

Oscar-winning filmmaker Guillermo del Toro says his upcoming "Pinocchio" project for Netflix will be a political parable and not the kid-friendly fare of the competing Disney remake. "It's not a Pinocchio for all the family," he said of his story, set in 1930s Italy, according to Hollywood Reporter. Is it a political film? "Of course. Pinocchio during the rise of Mussolini... A puppet during the rise of fascism, yes, it is," he was quoted as saying at the Marrakech Film Festival.