Cyclone Kyarr likely to intensify into extremely severe storm in next 24 hours, to bring rains, thundershowers to Saurashtra, south Gujarat

Ahmedabad: Parts of south Gujarat and Saurashtra are likely to receive light to moderate rains and thundershowers over the next four days with cyclonic storm "Kyarr" hovering over the Arabian Sea, the India Meteorological Department (IMD) said on Saturday. 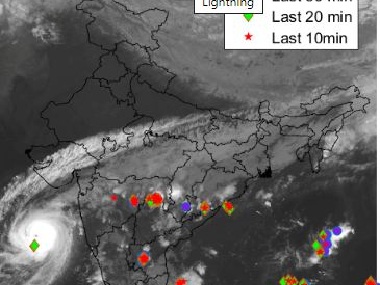 The met department said the sea will become "rough to very rough" along and off the south Gujarat coast during the next 24 hours until Sunday afternoon. The IMD advised fishermen not to venture into south Gujarat coast for the period due to the prevailing sea condition.

The met department said a few places in South Gujarat districts like Dangs, Tapi, Surat, Bharuch, Valsad and Navsari, and Amreli, Gir Somnath, Bhavnagar and Junagadh in Saurashtra and Union Territory of Daman and Diu will receive "light to moderate rain/ thundershowers", mainly due to the impact of the cyclone, till Tuesday.

At 11.30 am on Saturday, it lay centred about 350 kilometres (km) west-southwest of Ratnagiri (Maharashtra), 410 km south-southwest of Mumbai and 1690 km east-southeast of Salalah (Oman).