In his first comments on the gruesome incidents of rape in Unnao and Kathua, Prime Minister Narendra Modi said today that no criminal will be spared and daughters will get justice. He said such incidents shake our sensibilities.

Congress continues protest over rising crimes against women in the country

The Pradesh Congress Committee of Madhya Pradesh will hold a candle light March at Prabhat Chowk in Bhopal. Several Congress workers especially the youth have started gathering at PCC office 'Indira Bhawan' in Bhopal. Many will join the rally near Prabhat Chowk.

18:17 (ist)
Congress to stage nationwide protests today
Congress will take forward the protest march against the Kathua and Unnao rape cases and has asked its cadres at state and district headquarters to stage similar demonstrations across the country on Friday, demanding justice for the victims.
The party general secretary (organisation) Ashok Gehlot has told all state Congress chiefs to galvanise the cadres in each state and stage candle-light marches at all state and district headquarters.
02:13 (ist)

Rahul Gandhi tears into BJP for Unnao and Kathua horror and then leaves India Gate around 1:30 am Friday

"This is not a political issue but a national issue. This is related to atrocities against women. Government should come forward and do something for women's safety. Here, common man and representatives of different parties have gathered seeking justice for victims."

"We'll have to save our daughters from this government": Congress spokesperson Rajiv Tyagi

00:54 (ist)
What happened in Kathua is beyond humanity: Rahul Gandhi at India Gate

"What happened in Kathua is beyond humanity, an 8 year old innocent was kidnapped, brutally raped by many men, including a juvenile and tortured till she died. This defies all human values we have grown with as a society.

This brutality instead of being  punished is actually being shielded. We absolutely condemn this and hope BJP wakes up to its commitment to the people of the nation and ensures stringent punishment is meted out to the perpetrators of the crime.

We see similarly how in Unnao an underage girl was allegedly raped by elected representative of the BJP and members of his family. Instead of ensuring justice was done to the victim, we have seen how ger family has been threatened and silenced by the accused.

The father of the victim was beaten to death in judicial custody. Only an outrage led to action from Adityanath government. In both the cases we seek immediate action against the accused and allowing justice to prevail even if it involves those who hold positions of power".

"We'll have the wake up the government": Ghulam Nabi Azad

Dressed in an indigo kurta, Priyanka Vadra joins her brother at India Gate; Robert Vadra is there too.

Some female reporters have been roughed up by Congress workers, say Firstpost reporters on location.

Just in: Priyanka Gandhi will be joining Rahul Gandhi at India Gate

This is a protest against Modi government: Priyanka Chaturvedi

"This candle March is to raise a voice of protest against Modi government and create awareness amongst people about the atrocities and injustice in the country, and how the government is maintaining silence and not taking action against the accused," Congress spokesperson Chaturvedi told Firstpost.

Save the girl child or the rapist?

Supporters moving from Congress party office towards India Gate. Rahul Gandhi is not part of this crowd.

Sanjay Nirupam: "Unnao and Kathua rape cases are a shame"

We've not been asked for permission ahead of Rahul Gandhi's candlelight march: Delhi Police

Scene outside Congress HQ at 24 Akbar Road in New Delhi

"Shaken to my core": Anushka Sharma

The candlelight march will start from AICC Head Quarters, 24 Akbar Road, and end at India Gate

All India Mahila Congress to observe black day on 17 April

21:39 (ist)
Rahul calls Kathua rape 'unimaginable brutality'
Congress president Rahul Gandhi on Thursday described the rape and killing of an 8-year-old girl in Kathua as "unimaginable brutality" that cannot go unpunished and wondered how anybody can seek to protect the culprits. He also lashed out at the politics being played over the crime. "How can anyone protect the culprits of such evil," he asked, adding that the violence against the child was a crime against humanity.- PTI
21:37 (ist) 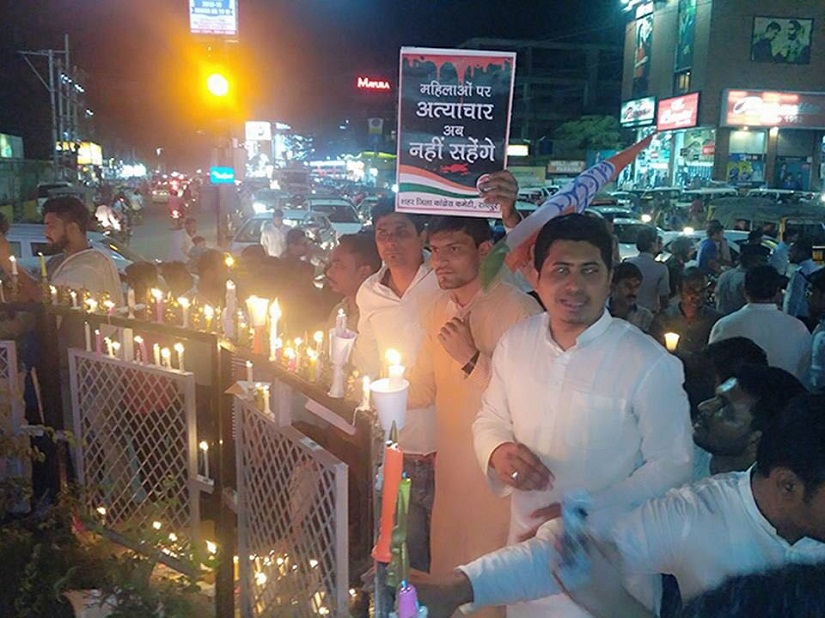 If women are suppressed, it is a blatant attack on the spirit of democracy: Ashok Gehlot

Our President Sh #RahulGandhi is a firm believer in empowerment for the other half of the population, If women are suppressed, it is a blatant attack on the spirit of democracy. Our party draws inspiration from his thoughts, and from the time-tested ideals of the Congress party.

In his first comments on the gruesome incidents of rape in Unnao and Kathua, Prime Minister Narendra Modi said today that no criminal will be spared and daughters will get justice. He said such incidents shake our sensibilities. 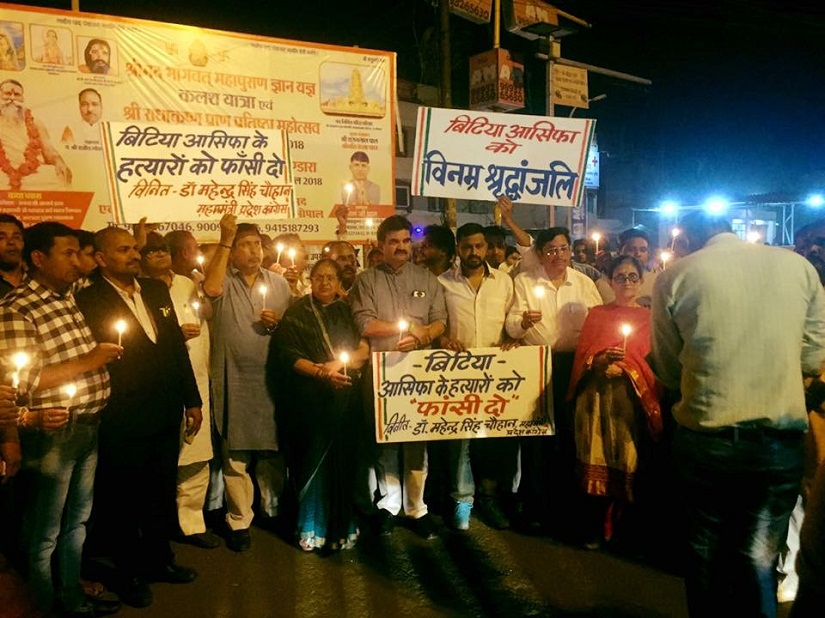 New Delhi: The Congress on Friday hold protest across the country, demanding justice for the victims. They said party general secretary (organisation) Ashok Gehlot has told all state Congress chiefs to galvanise the cadres in each state and stage candle-light marches at all state and district headquarters.

Gandhi had led a midnight march to the India Gate in the national capital last night asking Prime Minister Narendra Modi to save and protect the girl child.

The Congress has upped the ante against the government over alleged inaction in the Kathua and Unnao rape cases.

A 17-year-old girl was allegedly raped by BJP MLA Kuldeep Singh Senger last year in Uttar Pradesh. The incident came to light when she attempted to immolate herself outside Chief Minister Yogi Adityanth's residence in Lucknow.

In Jammu and Kashmir, an eight-year-old girl had disappeared from near her home in a village near Kathua on 10 January. Her body was found in the same area a week later.

The chargesheet in the case had revealed chilling details about how she was allegedly kidnapped, drugged, raped inside a place of worship before being killed.

The Opposition party has also alleged that the accused were being "protected" by the authorities concerned.

Gandhi, amid slogans against the BJP and the prime minister during the march last night, had claimed that the women of the country are afraid to go out and the government must ensure their safety.

He said Modi's silence over the rising atrocities against women was "unacceptable" and that India was waiting for him to speak up.