The Congress just released its manifesto for the 2019 general elections. Dealing with Jammu and Kashmir obviously forms an important part of it, more so because of two factors. The first is that for the first time a serious attempt was made at seeking professional advice on national security from experts: Lt General DS Hooda (retd) — who oversaw the 2016 surgical strike — recently handed over a copy of the party’s draft national security strategy to Congress chief Rahul Gandhi.

Obviously, Hooda knows the reality of the situation on the ground in Jammu and Kashmir and his views are respected. The Jammu and Kashmir bit in the manifesto should automatically be extracted from there. Second, Jammu and Kashmir is no better off than when the Congress left it. The Congress must have done some soul-searching on the inability of its leadership to move the situation beyond the military stabilisation achieved from 2011 to 2013; perhaps the best situation which presented itself militarily in the 30 years of proxy war with Pakistan. 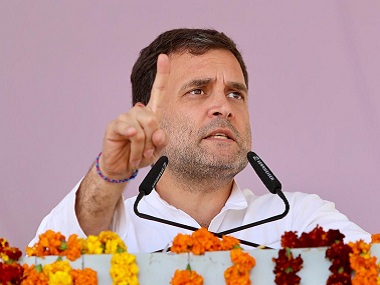 These are the main issues on which the Congress has chosen to focus:

1) Review of the deployment of armed forces, moving more troops to the border to stop infiltration completely, reduce the presence of the Indian Army and Central Armed Police Forces (CAPFs) in the Valley, and entrust more responsibility to the Jammu and Kashmir Police to maintain law and order.
2)Review Armed Forces Special Powers Act. Suitable changes will be made in the text of the laws to balance the requirements of security and the protection of human rights.
3) Talks without pre-conditions while eschewing muscular militarism and legalistic formulations; primarily looking for an innovative federal solution.
4) Appointment of three interlocutors to facilitate talks with civil society even as no tampering with Article 370 finds mention.
5)Schemes such as UDAAN, HIMAYAT and UMMEED to impart training in skills and create economic opportunities for the youth of Jammu and Kashmir, initiated by the former UPA government, to be reinstated.
6) Action against discrimination and harassment of students, traders and others belonging to Jammu and Kashmir in the rest of India while ensuring their safety and their right to study or do business.

These points comprehensively cover the negative situation in Jammu and Kashmir, but there isn’t a word on the all-important issue of governance or of promotion of amity between Jammu, Kashmir and Ladakh, where people of the first two sub regions do not even wish to talk with each other.

Commencing with the military aspect of redeployment, no doubt the terminal aim of any pragmatic Indian leader should be to get the army back to the Line of Control (LoC). That does not even look at the current problem where there is large-scale local terrorist recruitment and it’s the army’s Rashtriya Rifles (RR), which in conjunction with the Central Reserve Police Force (CRPF) and Jammu and Kashmir Police provides the glue towards the domination and stabilisation of the security environment. In Kashmir, the sanctity of the LoC, counter-infiltration, gathering of intelligence, domination of the counter terror grid and the conduct of operations in the hinterland is one continuum. Disturb this and the whole edifice will get shaken up; most undesirable when fresh threats of suicide bombers have emerged in the hinterland. It was an erroneous decision in 2012 to remove troops from Kashmir and redeploy them in Ladakh, denuding parts of south Kashmir, which eventually became the bone of contention.

The Congress should know enough about AFSPA and with what urgency it was drafted and passed on 4 July, 1990. Since then, the situation has undergone drastic changes in terms of nature of threats and operations. Tremendous experience has been gained from the thousands of contingencies faced. The Congress manifesto under discussion on television came across as a drastic step to remove AFSPA. Later, the party spokespersons clarified that a review of AFSPA would be considered in consultation with the army, although its emphasis of review appeared to be in relation only to human rights. The use of the sentence — “review to balance the requirements of security and the protection of human rights” — appears to make a case for both. If the party has understood the predicament of servicemen under prosecution for doing their duties and the challenge of registering FIRs against soldiers while FIRs against stone-pelters are quashed, then one can only compliment it; not otherwise.

The issue of talks with stakeholders is an easy point to state, but is rarely implemented in the wake of the dynamics of violence. Firstly, the party should have mentioned that it would seek a fresh and representative leadership among civil society with whom engagement could be undertaken. ‘Talks with whom?’ is the inevitable question that would be asked. With the Hurriyat Conference insignificant and the Jammu Kashmir Liberation Front under embargo, the identification of new leadership is essential to take away the influence of United Jihad Council. Talks without pre-conditions could be welcome as long as the elements being engaged owe allegiance to the Indian Constitution and there is no demand for the inclusion of Pakistan anywhere within purview.

The proposed appointment of three interlocutors is old wine. The last time they did some splendid work by engaging an array of stakeholders across the divide of Pir Panjal. However, for almost three years the report of the interlocutors remained in secrecy with the UPA government without being tabled in Parliament and with no discussion on it with the security forces or other major players. The interlocution phase created a ray of hope among the people and added to positivity. However, the Congress never took advantage of that fact to remain in touch with the people.

In terms of civil society, there is no mention of the missing section: the Kashmiri Pandits. Surely, a manifesto of a major national party cannot forget the plight of a community which has remained virtually exiled from home. Even a mention of efforts to return it to its rightful place would have been good. The stance on Article 370 is well known. However, the necessity of initiating a dialogue with the people is a must. I strongly believe that eventually both articles 370 and 35A will get abrogated, but doing it the conducive way by urging, discussion and final acceptance is better than simply accepting it blindly. Even Prime Minister Narendra Modi alluded to such an approach in his comments on Article 370 in Jammu during a pre-election rally in 2014.

UDAAN, HIMAYAT and UMMEED are indeed good schemes for development of skills to have better scope for employment, but their execution cannot be as tardy as it was under the last Congress-National Conference combine. Strict monitoring of funds is a necessity to avoid corruption which has huge scope in such schemes. Of course, support to Kashmiri traders and student community pursuing business and studies in other states is always welcome.

Obviously, the Congress has chosen to focus on the internal aspects of Jammu and Kashmir. However, what must be considered is that Pakistan is — and will continue to be in the near future —  an important player. In a way, avoiding mention of Pakistan in a manifesto of the internal aspects of Jammu and Kashmir may be smart thinking lest it hijacks the entire security related issues of the manifesto.

One expected a vision statement on Jammu and Kashmir that could capture the essence of the problem and how in a concept the same could be addressed towards resolution, internally. All eyes would now be peeled for the BJP manifesto, which will probably be released early next week. It will be interesting to compare the attitude of two mainstream parties to Jammu and Kashmir. And then, it is a matter of waiting for the electorate to render their verdict.