There's a flyover on Chennai's outer ring road, the tallest section of which is now an island. The rest of the structure is submerged in water. At its deepest, the flood that has claimed this elevated road is 12 feet deep.

People here speak of a man who was being swept by a gushing tide towards this asphalt island. Those stranded atop the flyover lowered a rope that the man could grab and fasten around his waist so he may be raised to safety. The man grabbed the line and knotted it around his waist. The people above tugged at the rope but the man remained in the water.

He didn’t know it but the man had tied himself to an electric pole that was also submerged. He clung to it and died.

On Thursday, the army, which was called to assist in rescue work, began operations by extracting the man’s body from the water around 7 am. His hands remained encircled around an absent pole, frozen in death. The death toll has crossed 280. 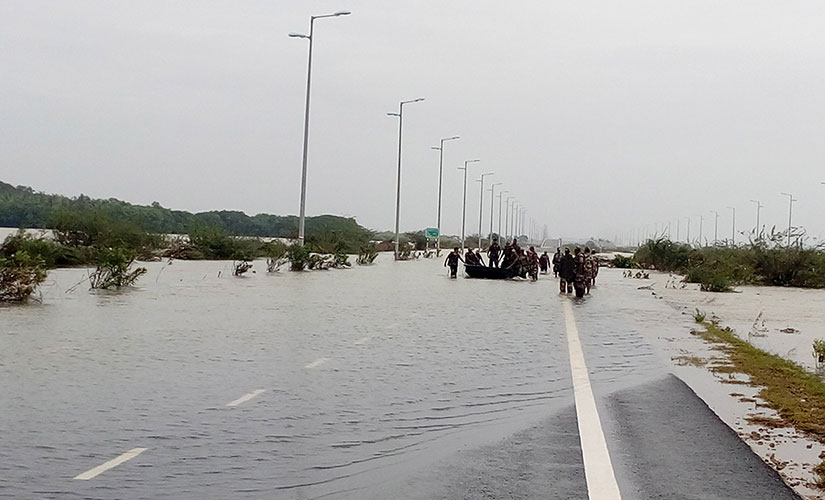 The army recovers the body of the man. Pulasta Dhar/ Firstpost

Firstpost spent 12 hours with the army during these operations.

The previous day, Lieutenant Colonel Ravindran R's team rescued 70 students of SRM University. They were trapped on the second floor.

Pratyush Badrinath, a 17-year-old enrolled in an engineering course, was one of them. He said he’d hoped it would rain so his exams would be called off. And then it began to rain. “Water was neck deep and gushing so fast that most of the things on the ground floor got carried away with it," he told Firstpost.

The students are now housed at the army’s Pallavaram base in Chennai. The lieutenant colonel's mobile phone, which was dead, caught a signal while we were on our way to the outer ring road where the man died clutching an electric pole. The calls and messages didn’t stop. “I'm getting messages about people's wives and kids stuck in various apartments and calls to reach certain places quickly. But we're being deployed by the civil administration and can only go to those areas. However, I always try to give them hope when they call,” he said. “The point is to never sound defeated even though there are times I know I cannot do anything. But I can assure you, we always get to places," he said, as we crossed water-logged areas in a Maruti Gypsy. After they pulled out the man’s body, the army's next stop was Mudichur. This was one of the worst affected areas. From a distance, it looked like a lake. As we approached, the tops of houses came into view. Helicopters flew from apartment to apartment, hovering over people waving makeshift red flags. The navy soon arrived in inflatable boats.

The army discovered another body and sent it to the morgue in an ambulance. The living too gathered here. Some were awaiting assistance. Many were frustrated at the lack of it. Some were wounded, others suffered broken bones. The water here reached my waist. This was after hours of clear weather. “Where were you? Every number we called. Every helpline. Even the army and the navy headquarters. Today you have come, but do you know what the situation has been like in the last two days? An old lady was stranded alone on her terrace. She only had my torchlight for company,” a young man screamed at the officers.

The navy is not at fault. Neither is the army. “We get distress calls and then we see how reachable the area is,” said Commissioner of Labour for Mudichur, Amudha P. “But sometimes we simply don't get these calls. And yet we have rescued between 2,000 and 2,500 people with the help of the army.” Major Sandeep Kurup is in charge of the rescue and relief boat to which I have been assigned. It has circled Mudichur twice and is on its third trip. A group of eight jawans are with us – manoeuvring the boat between electric poles and compound walls barely cresting the flood waters. As they hit shallow patches, the jawans leap out of the boat and haul it to a deeper section of water.

“We simply couldn't get here two days back. It was terrible. There was no chance. The water levels, the visibility and the overall conditions were too severe,” Kurup said.
The army has had to make multiple trips in these areas because people refuse help. They think it is safer to wait out the flood at home.

Satya Prakash is one of those who asked to be rescued. He is 30. “Half an hour I've waited. Sorry, two days. Sorry, I've lost track of time,” he said, stepping off the boat.
Back at base camp we met Captain Bharat Patni who said he hadn’t slept for 30 hours. “But I am still on standby duty today in case someone is needed somewhere,” he told me.