New Delhi: The government has set up a dedicated desk, headed by an additional secretary, to look after all matters related to the Supreme Court verdict on the Ayodhya issue.

The move bears significance in the wake of 9 November judgment of the Supreme Court which allowed construction of a Ram Temple in the disputed site in Ayodha.

The apex court also ordered handing over of a 5-acre plot to Uttar Pradeah Sunni Waqf Board and setting up of a trust for construction of the Ram temple. 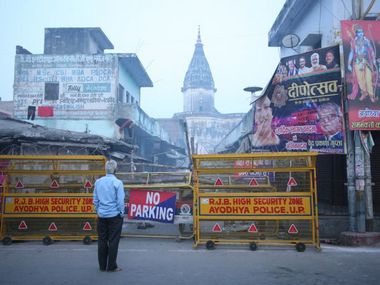 File image of the site that was at the centre of the Ayodhya dispute. Getty images

Now, this new wing of the home ministry, headed by Kumar, will look after all matters related to the Ayodhya issue.

There have been reports that the Uttar Pradesh government has sent a proposal to the home ministry suggesting three plots in Ayodhya, one of which can be given to UP Sunni Waqf Board. "All such matters will be now handled by the new desk in the home ministry," an official said.

Interestingly, Kumar also heads the Department of Jammu and Kashmir and Ladakh affairs in the home ministry.

He was the key officer in the central government's move to abrogate the special status given to Jammu and Kashmir and bifurcation of the state into two Union Territories.

There was a dedicated Ayodhya cell in the home ministry in the 1990s and early 2000s but it was closed down after the submission of the Liberhan Commission of Inquiry on Ayodhya.

Joint Secretary (Women Safety) Punya Salila Srivastava has been given the charge of the merged Internal Security-I division along with her present responsibility in the home ministry.