99 names of Allah, none of them stand for violence: What PM Modi's speech at World Sufi Forum suggests

What are the true values in Islam: peace and compassion. Prime minster spoke about this on the inaugural session of the World Sufi Forum on March 17 along with a host of speakers from across the world as his word reverberated on the second day of the conference.

Talking to the speakers it became evident that “an alternative and true narrative that defines Islam has been created” from the event and with the words of the prime minister.

Dr Muhammad Bin Yahya Ninowy from Madina Institute USA, speaking to Firstpost, said, “Prime minister Narendra Modi hit the key points by talking about shared common ground between all different sections of social fabric and how Sufism brings them all together. He even talked about micro-minorities. He was so right when he said that Sufism is about compassion and peace and it is the land of India where Sufism grew and it is India where this great tradition will and should grow and contribute to humanity.”

Modi, in his speech had said, “It reminds us that when we think of the 99 names of Allah, none stand for force and violence, and that the first two names denote compassionate and merciful. Allah is Rahman and Raheem. Sufism is the voice of peace, co-existence, compassion and equality; a call to universal brotherhood.” 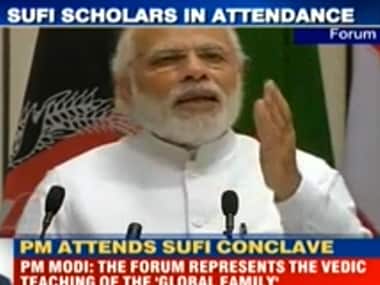 Jonathan Granoff, president, Global Security Institute and ambassador for peace, security, and nuclear disarmament of the parliament of the world’s religions echoing the same view, said, “It was a great speech made by a political leader on the subject of purpose of human birth. He extracted the principles of universal values from a specific tradition that is alive and powerful in India, which is Sufism, and explained its relevance not just to India but to the whole of humanity and human family which he identified as one.”

Explaining the relevance of Sufism in the world, Modi had said, “When terrorism and extremism have become the most destructive force of our times, the message of Sufism has global relevance… we must reject any link between terrorism and religion. Those who spread terror in the name of religion are anti-religious. And, we must advance the message of Sufism that stands for the principles of Islam and the highest human values. This is a task that states, societies, sages, scholars and families must pursue.”

“The point he was making is essential for a sustainable future. Without following and believing in such shared values of what he talked about, fulfilment of sustainable human goals is not possible,” said Granoff.

He added, “It is required for marginalising and ending those who distort religion and reduces in it the ideology of exclusivism and creating violence. The values he identified will help to create a cooperation needed to counter and overcome all the distortions of the religion.”

Talking about the Muslim community and Sufism, Modi had said, “It is this spirit of Sufism, the love for their country and the pride in their nation that define the Muslims in India. They reflect the timeless culture of peace, diversity and equality of faith of our land; they are steeped in the democratic tradition of India, confident of their place in the country and invested in the future of their nation; and, above all, they are shaped by the values of the Islamic heritage of India. It upholds the highest ideals of Islam and has always rejected the forces of terrorism and extremism.”

Md Tolegen Mukhamejanon, a musician from Kazakhstan and one of the speakers, while talking about the Sufi forum and prime minister’s speech said that “the memories of the day, words of PM Narendra Modi will remain in my heart throughout my life.”