Editor's Note: Despite strong opposition from BJP and other factions, the Congress-JD(S) coalition government in Karnataka is gearing up for Tipu Jayanti on 10 November. But the celebrations are likely to be muted this year; all events are being restricted to indoor facilities and the security apparatus is on high alert to prevent any violence. This is the final article in a three-part series of analyses of Tipu's reign and how the gaps in the narrative have driven the vitriol around the colonial-era hero among different communities.

Mangaluru: The Congress-Janata Dal (Secular) coalition government celebrated the birth anniversary of Tipu Sultan on Saturday amid tight security despite stringent opposition by the Bharatiya Janata Party and several other organisations, but it's the BJP which claims to have achieved success in the showdown. The Karnataka BJP unit claims that it has already proved its point by holding anti-Tipu Jayanti protests on Friday, a day before the celebrations, and thus ruffling quite a many political feathers with the move.

“We had definite information that the government had given instructions to selectively clamp prohibitory orders of various grades, particularly on the coast, Kodagu and old Mysore region. So, we organised the protests on 9 November and drove our point home in all the districts,” Mysuru-Kodagu MP Pratap Simha said. 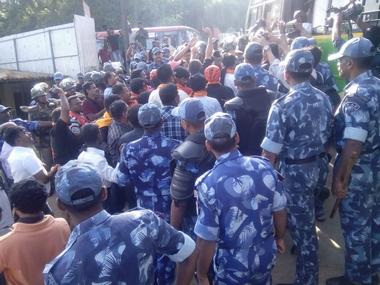 On Saturday morning, BJP leaders and workers across the state descended outside the venues where the celebrations were slated. Madikeri MLA MP Appachu Ranjan, Virajpet MLA K G Bopaiah and 21 other BJP leaders were detained for obstructing Tipu Jayanti celebrations organised by the taluk administration.

Madikeri, the district headquarters of Kodagu, had seen violent clashes during the 2015 celebrations, during two people were killed. On Saturday, Hindu groups staged protests and offered prayers at several temples in the district, and raised slogans such as 'Kuttappa amar rahe', remembering VHP secretary D Kuttappa who died in the 2015 clashes.

In Bidar, BJP workers defied government orders – which had prohibited anyone from taking out processions to or against Tipu Sultan — by taking out a march from Ambedkar Circle to the District Commissioners office. In Davangere city, BJP activists, led by district BJP president Yeshwanth Rao Jadhav, were arrested by the police near the Tipu Jayanti programme venue at the grounds of the government high school as they attempted to barge onto the podium of the programme.

BJP, which has steadfastly opposed Tipu Jayanti since its conception by former chief minister Siddaramaiah in 2015, was expected to up the ante this year along with other pro-Hindu organisations as it's being played up as a major poll issue for next year. Several groups like the Vishwa Hindu Parishad, Bajrang Dal, and Sri Ram Sene have already observed separate protests against the state government on the matter.

Leaders of the saffron party have been consistently categorising Tipu Sultan as an “anti-Hindu and intolerant” ruler and have accused the Congress of glorifying a “tyrant” to secure their vote bank. BJP also said that Tipu was not a freedom fighter since he took on the British for his own needs.

The steady and sustained attack on Tipu by BJP galvanised several other factions like the Kodavas and Dakshin Kannada Christians, who have been trying to assert that the 18th-century ruler carried out massacres and destroyed their communities.

Along with propagating their historical interpretations of Tipu Sultan’s rule, BJP leaders have also presented several other reasons why Tipu Jayanti should not be celebrated. Former deputy chief minister R Ashok, who led a group of protesters in Bengaluru urban on Saturday, alleged that the state government was creating a corridor for the “Jihadis of Kerala” to enter Karnataka by creating the occasion of Tipu Jayanti.

“On the advice of doctors, the chief minister will take rest for three days till 11 November 11. He will spend time with family and there will be no official engagements on these days,” the Chief Minister’s Office said in a statement.

Sources have told 101Reporters that celebrations this year would largely be a Congress show in most parts — especially in districts like Mysuru, Mandya, Ramanagara, Kodagu, Dakshina Kannada, Udupi, and Uttara Kannada since Tipu Jayanti is a big draw in these regions.

According to sources, JD(S) workers and leaders plan to resort to the “disappearing act” during the 2018 Tipu Jayanti.

“Majority of these areas are under old Mysore region where JD(S) is politically stronger than Congress. The JD(S) has understood that their political survival in this region could hinge on the stand taken by the party on Tipu Jayanti,” said Nanjunde Gowda, a JD(S) leader of the old Mysore region.

“The party is playing safe with Congress as it was in the process electing a mayor for Mysuru City Corporation from JD(S) in November and cannot totally isolate itself from the Congress’ agenda including that of Tipu Jayanti,” he added.

Sources close to the HD Deve Gowda family also said that HD Revanna, state Public Works Department minister and Kumaraswamy’s brother, too gave the celebrations a miss saying he would be attending various programmes outside Bengaluru, in Puttur and Subramanya of the Dakshina Kannada district.

Taking a departure from the traditional for or against viewpoints, some have also formulated their own stance on the issue. “Tipu Jayanti is nothing but an appeasement by parties in power and the main opposition for their own vote bank. We are in support of permanent and living monuments like a university, or a chair in a university to study Tipu’s contributions to Karnataka and national history,” said Athavulla Jokatte, a senior leader of the Social Democratic Party of India.