Pune: A year after caste clashes marred the event to celebrate the anniversary of the Koregaon Bhima battle, eight to 10 lakh people paid tributes amidst a heavy police presence at the memorial here, which has come to be known as a symbol of Dalit pride.

A senior police official said "scrupulous planning" and "cooperation from the locals" ensured that the day passed off peacefully.

What set apart Tuesday's event from last year was the prevalence of a cordial atmosphere and an active participation of the locals, who welcomed the visitors with roses and water bottles since Monday, besides offering them free food. 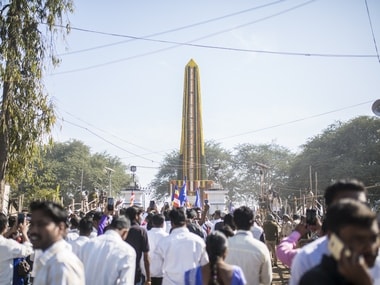 Around 8 to 10 lakh people gathered at the Bhima Koregaon war memorial on 1 January amid heavy security. Image Courtesy: Shrirang Swarge

Security agencies were keeping a tight vigil with CCTV and drone cameras in view of the caste clashes that had erupted last year, leaving one person dead and several others injured.

Police are probing the alleged Maoist links to the violence, which they suspect was triggered by the provocative speeches made at the Elgar Parishad conclave in Pune on December 31, 2017.

At least 5,000 police personnel, 1,200 Home Guard jawans, 12 companies (comprising around 100 personnel each) of the State Reserve Police Force (SRPF) and 2,000 Dalit volunteers were deployed in and around Perne village, where people paid tributes at the "Jay Stambh" memorial.

As a precautionary measure, internet services were suspended in the area, police said.

As many as 500 CCTV cameras, 11 drone cameras and 40 video cameras were monitoring the area, a senior police officer said, adding that police checkposts were also set up along the border of Pune district.

"Scrupulous planning, cooperation from the locals as well as the visitors and a multi-pronged approach by the police and the district administration have paid results as the entire commemoration took place on a peaceful note," Superintendent of Police Sandip Patil said.

According to him, around eight to 10 lakh people visited the victory pillar and the villagers and visitors extended full cooperation to the administration in maintaining peace.

The "Jay Stambh" memorial was erected by the British in Perne for the soldiers killed in the Koregaon Bhima battle on January 1, 1818. It has since attained a legendary stature in Dalit history.

According to the police, a significant number of people came to the memorial this year from far-off places in Marathwada, Vidarbha and districts of the neighbouring north Maharashtra as well as from various parts of the country.

"For the first time in history, such a large number of people from the Dalit community came to pay their tributes at the Jay Stambh," claimed a resident of Perne.

Ranjeet Khandare, who came from Navi Mumbai, said the number of visitors had doubled this year.

Around 40,000 people visited the nearby Vadhu Budruk village, where the "samadhi" of 17th-century Dalit figure Govind Mahar was located, a police officer said.

Among politicians, Bharipa Bahujan Mahasangh leader Prakash Ambedkar, the grandson of Dalit icon BR Ambedkar, was the first to offer his tributes at the memorial in the morning.

"I am very happy with how the locals cooperated (with the authorities) and welcomed the visitors warmly," he said, adding that he would follow up with the Maharashtra and Union governments for the development of the victory pillar and granting it a pilgrimage status.

In the Dalit narrative, the 1818 battle was a victory over casteism as the British Army, comprising a large contingent of Dalit Mahar soldiers, had defeated the forces of the Peshwas -- the Brahmin custodians of the Maratha kingdom.

Earlier in the day, Ambedkar laid a wreath at the war memorial and hoped that the event would pass off peacefully.

"Unlike last year, the people of the surrounding villages are extending all help. They are lending a helping hand. I hope for a peaceful completion. However, the police should not act in haste," he told reporters.

Ambedkar said the number of visitors was likely to swell this year.

"The reason behind the surge is that the likes of retired Supreme Court judge PB Sawant, retired high court judge B G Kolse-Patil and some students (from the Kabir Kala Manch) took the history of the Koregaon Bhima battle to rural Maharashtra.

"Unfortunately, the same students who bridged the gap between the Marathas and the OBCs using the Elgar Parishad platform were labelled as Naxals by the government," he claimed, adding that the government should find the real perpetrators of last year's violence and bring them to justice.

In the wake of the clashes, the police had booked Hindutva leaders Milind Ekbote and Sambhaji Bhide on charges of inciting violence.

Ashok Athawale, a resident of Sanaswadi whose house and a fabrication unit were torched during the violence, said his entire family was offering food to the visitors and ensuring that they were not inconvenienced.