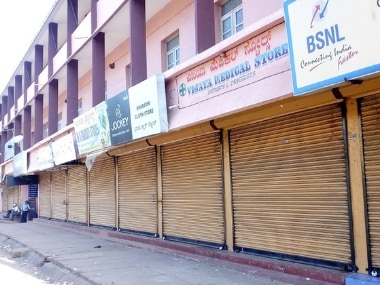 Bharat Bandh LATEST updates: Shiv Sena MP Sanjay Raut dismissed talks of senior BJP leaders asking his party to stay away from the nationwide bandh called by the Congress to protest the rising prices of fuel.

About 75,000 fishermen across Kanyakumari have not gone to sea today to show their support for the bandh and their concerns about rising diesel prices. Across its major fishing villages like Muttam and Colachel, 2,500 mechanised boats and 8,000 smaller fishing boats stayed tethered. In Thengapattanam, fishermen protested aboard their boat, raising slogans against the Centre.

Targetting the NDA government over the high petrol and diesel prices, Congress said that VAT on petrol in Madhya Pradesh is 35.80 percent. "Is this high taxation due to global reasons," party spokesperson Randeep S Surjewala asked

A complaint has been filed in Jorhat Police Station of Assam against BJP district president of Jorhat, ​Santanu Pujari, for allegedly molesting a female bandh supporter.

In textile capital Tiruppur in Tamil Nadu, almost 2,000 factories have been shut in support of the Bharat bandh. The damage of the textile business in the city for Monday is estimated to be Rs 50 crores. Nearly the entire city has been completely shut down. Only a small number of private businesses, autos and taxis are plying on the roads and educational institutions are shut. There is heavy police deployment in the city.

BJP chief Amit Shah will be meeting Union petroleum minister Dharmendra Pradhan amid the nationwide shutdown called by Congress on Monday, according to a report. Earlier in the day, Congress president Rahul Gandhi hit out at the Narendra Modi government for failing to control the skyrocketing fuel prices. However, the BJP in a press conference said that the government is not responsible for it as "global forces are at play".

Congress protesters attacked the tahsil office staff in Kakatpur block of Puri district in the presence of police. Some of the staff were injured and some fled. The tahsildar and some other staff members were working in the office, when the Congress members forcibly broke the gate and attacked staff working in the office.

The two-year-old, who died in Patna amid the nationwide shutdown, did not get an ambulance first and later his vehicle was stopped at two places which led to the delay. The kid had high fever since Sunday night. Senior district officers, however, have rejected the parents' claim and said the child did not die due to Bharat Bandh. The father Pramod Jha hails from Balabeegha village which falls under Makhdumpur police station in Jehanabad district.

In Madhya Pradesh's Neemuch, Congress workers were raising slogans to support the Bharat Bandh. While the cadre shouted, "Congress zindabad, Rahul Gandhi zindabad', someone by mistake yelled out, "Rahul Gandhi murdabad". They realised their mistake soon enough. After a short, awkward silence, the cadre marched on.

Addressing a press conference after a child's death was reported in Bihar, law minister Ravi Shankar Prasad slammed the Congress for lacking sensitivity and responsibility. The party alleged that the death of the child was Congress' onus. "Bharat Bandh was a failure and we regret for the violence."

Speaking about hike in prices of fuel, Prasad that the reasons of this price hike was due to non-availability and limited supply of petroleum. "We welcome purposeful argument but the reasons for hike in price not under the control of the government. It is upto the oil producing countries and several geo-political factors." "Congress is creating atmosphere of fear."

A two-year-old child has reportedly died due to delay in receiving treatment in Bihar's Patna. Reports have said that due to road blockades the parents were not able to reach the hospital in time. The father of the child believes that if the roads were clear, his child would still be alive today.

Leading the Congress march in New Delhi and spearheading the nationwide Bharat Bandh, Rahul Gandhi addressed the workers and slammed the Narendra Modi government for lacking empathy for the poor. Slamming the ruling government over price hike, Rahul said, "Gas Cylinder that used to cost Rs 400 is now Rs 800. Modiji said that what didn't happen in 70 years, we will do in 4 years. Wherever he goes, he just goes to sow division."

Reiterating his point on BJP supporting industrialists, Rahul said, "India is tired of Narendra Modi. He does not care for farmers or the poor, he cares for section of industrialists." Turning his attention towards the media, Rahul retorted and said that, "I know you guys (the media) are living under the fear of writing the truth. But don't worry, the nation stands with you."

Maharashtra Congress president Ashok Chavan was also arrested along with Mumbai Congress chief Sanjay Nirupam on Monday morning at the Andheri railway station. The duo have reportedly been taken to DN Nagar police station. Chavan, earlier, was part of the rail roko at the Andheri station.

The shutdown strike affected relief activities in the flood devastated areas in Ernakulam and Thrissur districts in Kerala.  Though the district administration in Ernakulam had directed all employees to attend office, the attendance was very thin in Aluva and Paravur areas, which were devastated by the flood.

Over 5,000 police personnel have been deployed around Chennai to maintain peace during the bandh, with special focus on the central government buildings.

While the Nationalist Congress Party and Maharashtra Navanirman Sena in the state have extended their support to the Bharat bandh called by Congress, the BJP ally Shiv Sena will not be participating in the shutdown but will look at it "neutrally".

After his arrival at the Rajghat, the Congress president, along with other Opposition leaders, is now marching towards the Ramlila Maidan. The Bharat bandh has been called by the party to protest against the skyrocketing fuel prices.

Hundreds of passengers are stranded at Bhubaneswar's Baramunda bus stand. Several running trucks and buses were stopped by Congress party workers on their way on the roads to mark the Bharat bandh on Monday in Odisha.

Top Congress leaders such as Randeep Singh Surjewala, Ashok Gehlot, and Abhishek Manu Singhvi led the Bharat bandh at Rajghat in New Delhi and said the Narendra Modi government was "all about jumlas". Meanwhile, five people were detained after Congress and Left supporters tried to stop Agniveena Express at Durgapur (West Bengal). They were chased away by the local police and Government Railway Police.

In view of the Bharat bandh, nearly 15,000 policemen have been deployed across West Bengal, according to News18. The state government issued a circular saying that government employees' one day's salary will be deducted if they failed to turn up at their respective office.

Bus services of North Eastern Karnataka Road Transport Corporation (NEKRTC) will remain non-operational on Monday due to the Bharat bandh called by Congress and other Opposition parties against fuel price hike.

A number of Opposition parties will unitedly protest the rise in fuel prices in the country on Monday and participate in the 'Bharat Bandh' called by the Congress. Top Opposition party leaders such as Sharad Pawar, MK Stalin and Left leaders have openly extended their support for the call for shut down, while the Trinamool Congress has decided to stay away from the protest.

The Karnataka government has declared a public holiday for all schools and colleges in Bengaluru as a precautionary measure, ANI reported.

#Correction: #Karnataka Government declares public holiday for tomorrow for schools and colleges in Bengaluru as a precautionary measure ahead of #BharatBandh tomorrow. (Original tweet will be deleted) https://t.co/oaStT7d55a

The ruling TMC in West Bengal has expressed support on the issues on which the shut down has been called, but said it was against any kind of strike in the state according to the stated policy of party supremo and Chief Minister Mamata Banerjee. Congress chief spokesperson Randeep Surjewala alleged that the Narendra Modi government has "looted" Rs 11 lakh crore from the people of the country in the last 52 months and was running a "profiteering company" rather than a government. The way gas, diesel and petrol prices are increasing every day, it has caused great distress to farmers, he said.

"We demand that petrol and diesel be brought under the ambit of the GST. High prices of petrol and diesel found no mention in the BJP's national executive meeting because they are not bothered about the pain of public," Surjewala said. He also urged people to bring about a change in the country by ousting the BJP from power.

Earlier, Congress spokesperson Ajay Maken said 21 Opposition parties are supporting the Bharat Bandh, besides a number of chambers of commerce and traders' associations.

"DMK will extend complete support to the Bharat Bandh call by the Indian National Congress protesting against the BJP government for steep rise in prices of petrol and diesel. I urge the people and party cadre to make the bandh on 10 September a big success," Stalin has said. In view of the bandh call, Congress has urged party workers not to indulge in any violent protest.

"I appeal to all Congress workers to make the bandh violence-free. We are Mahatma Gandhi's party and we should not associate ourselves with any violence," Maken said a media briefing.

Petrol and diesel prices set new records on Sunday. According to the price notification issued by state fuel retailers, petrol price was raised by 12 paise a litre and diesel by 10 paise per litre on Sunday.

Maken said that he was "pained" to see that BJP's national executive meeting remained silent on the rising crude oil price issue and has not held any discussions on inflation or rupee depreciation, matters which are directly linked with the common man. "I am pained that the meeting did not discuss a solution to these issues," he said. Maken alleged the economic progress and GDP growth rate, which the UPA government maintained, has been squandered by the present dispensation.

"During our rule, Narendra Modi criticised the rising oil prices saying it has gone into ICU. What would they say now?" he asked. Hitting out at the BJP for attacking the Congress with the 'breaking India' barb, Maken alleged the government has stalled the Make in India initiative as 109 Rafale jets could have been manufactured at Hindustan Aeronautics Limited, a PSU.  He also said the government has not yielded to the Opposition's demand for a Join Parliamentary Committee probe into the alleged irregularities in the Rafale deal.