The Bharat Bandh call by the Congress and supported by the Left Front witnessed support on Monday from the public and other opposition parties across many states, more so since it was aimed at rising fuel prices over the last few months, which have pinched people and businesses all alike. 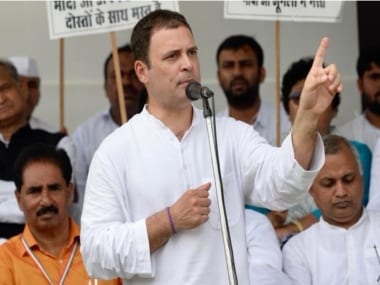 Congress president Rahul Gandhi took charge of the protests in New Delhi with a visit to the Raj Ghat early Monday, from where he headed to the Ram Leela Maidan, where other party leaders and workers had already gathered. Opposition party workers taking out demonstrations against the Central government were detained in several states. Visuals later appeared of the likes of Samajwadi Party president Akhilesh Yadav demonstrating by cycling with his party workers, Congress and CPI workers riding to district offices on bullock carts and protesters trying to block highways and railways.

Bhubaneswar Police detained more than 50 protesting workers and took them away from the protest sites in different buses. Protesters were detained in a similar fashion at Albert Ekka Chowk in Ranchi.

“Rising fuel prices in the country has sent the budget of common man haywire. This hike will turn the BJP government to ashes in the 2019 general elections. We are not out here to force shut down of shops but the general public has itself lend support to the bandh in a massive way,” said former Union minister and Congress leader Subodh Kant Sahay at the Albert Ekka Chowk in Ranchi.

As many as 5,055 people, including Sahay and RJD leader Annapurna Devi in Ranchi, sitting Congress MP Dheeraj Sahu and MLA Sukhdeo Bhagat in Lohardaga, Vijay Singh in Dhanbad, Irfan Ansari in Jamtara and Furqan Ansari and Rakesh Ranjan in Godda, were detained till 12.00 noon, according to Jharkhand Police.

“This peaceful bandh is against the dictatorial attitude of the government which has been lying to the public for the past four years in the name of development. The bandh is getting popular support and would mark the beginning of the end of BJP government in Jharkhand and Delhi,” said Janardan Prasad Singh, CPI(ML) convener in Jharkhand.

DCP, Bhubaneswar Commissionerate police, Anoop Kumar Sahoo, said no untoward incidents were reported until noon from Bhubaneswar and Cuttack, security had been tightened and the protesters were taken in preventive detention.

Tourists could not visit the world famous Konark Sun Temple Monday as the Congress workers locked the ticket counters and protested in front of the temple.

The bandh call was reciprocated in northeastern states as well with workers from several opposition groups taking to the roads in an apparent show of strength against the Central government. Congress and Left party workers took out protest marches on bullock carts and tongas in states like Karnataka and Chhattisgarh mocking the inability of the common folk to cope with high fuel prices.

Assam Congress MLA, Roselina Tirkey, said the police had detained many bandh supporters and Congress workers. “The bandh is not only declared by Congress. It is declared by everyone affected by fuel price hike. We had staged a peaceful protest in Sibasagar district but the police tried to disrupt it by detaining me and other Congress workers. The BJP has to be answerable for its fake promises.”

Around 300 Congress workers were detained in Tripura while picketing outside government offices. According to the superintendent of police, operation, Subrata Chakraborty, the detainees included PCC president Birajit Sinha and leader Gopal Chandra Roy. Around 400 people, including one of the most vocal Assam Congress leaders Kamalakhya Dey Purkayastha, were detained in Silchar, Assam.

With bus services across states affected and markets shut, small traders and vendors were the worst affected lot. Congress, JD(S) and Left party workers held demonstrations across Karnataka and got businesses to pull down shutters, but the Devaraja Urs Market in Mysuru remained open with vendors hoping for good business as Ganesha Chaturthi festival is round the corner. Agreeing that the Centre should bring down the fuel prices, vendors at Devaraja Urs market said it is them who get affected the most by such strikes.

Transport Unions, however, chose not to align with any political front over the bandh call, keeping the transportation of essential commodities, manufacturing and industrial goods out of the purview of the bandh. The unions, however, had organised a nationwide strike to draw Centre’s attention towards their demands with regards to fuel pricing, particularly diesel, earlier in July. Citing the July strike that had lasted eight days, Naveen Kumar Gupta, general secretary, All India Motor Transport Congress, told Firstpost that as a transporters body, they do not have any political alignment, and hence, are not identifying with Monday’s call for bandh. “We have convened a governing body meeting of various transport bodies to decide our further action plan concerning our demands,” Gupta said. Three of their main demands include uniform pricing of diesel, quarterly revision of prices instead of daily revision and bringing diesel under GST to curb the existing Central taxes.

No bandh in flood-hit Kodagu, but Kerala stays on strike

Karnataka Rakshana Vedike supported the bandh by taking out demonstrations in Belagavi, Davangere and Haveri.

The Kodagu unit of Congress, however, denied participating the bandh citing the devastation district faced due to recent floods. District Congress Committee president C Shivu Madappa said in a statement that Kodagu had incurred losses of more than Rs 10,000 crore during the floods and landslide, which had left the residents in distress. “Schools and colleges were also closed for a long time and this bandh would affect the students again. Hence, the party will not support bandh,” he said. The Congress and JD(S), however, staged a small protest against the Union government in Madikeri on Monday under Madappa’s leadership.

Kerala, which suffered larger havoc due to recent floods, participated in the bandh but several politicians, such as Congress MLA VD Satheesan and Muslim League MLA M K Muneer, expressed their opinions against the strike. Satheesan, an MLA from flood affected Paravur constituency, told Manorama News that he wouldn’t cooperate with Monday’s bandh. Satheesan said that Kerala should be excluded from the bandh, considering the current financial situation (of the state) after floods. At least flood affected areas should be omitted, he said.

In Thiruvarur, Tamil Nadu, over 100 farmers representing diverse opposition parties like DMK, CPI, CMI(M) and VCK blocked the road leading to the main bus stand. At least 250 fishermen in Thoothukudi stayed away from the sea Monday to express their support for the bandh.

Minor incidents of violence were reported from Pondicherry. While a state transport bus heading towards Villupuram was pelted with stones in Nellithope, another private college bus was reportedly attacked in the Union Territory. Police said they were trying to identify those who vandalised the buses. School buses were vandalised in Pune, Maharashtra, as well, according to media reports.

In New Delhi, capitalising on the coming together of opposition parties on a common agenda, Rahul Gandhi trained his arguments on the prime minister, saying that Modi had failed to fulfill promises. “The PM led economy, farmers and women into darkness,” he said.

The contributors are freelance writers and members of 101reporters.com.