Bardhaman station building collapse: One of the two injured dies; three-member committee to look into cause of accident

Kolkata: One of the two persons injured in a partial collapse of the Bardhaman Railway Station building in West Bengal succumbed to his injuries early on Sunday, a state minister said. 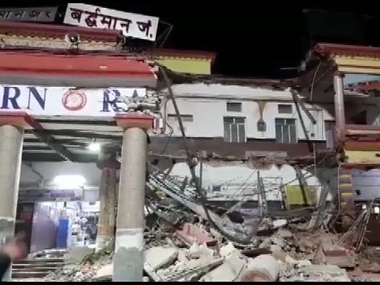 A portion of the two-storey station building collapsed at the Bardhaman railway station. ANI

A portion of the two-storey station building collapsed on Saturday evening. The deceased, in his thirties, is yet to be identified, an Eastern Railway spokesperson said.

West Bengal Minister Swapan Debnath said that the man, who suffered serious injuries when a chunk of concrete fell on his head, could not be saved despite efforts by the doctors of the Bardhaman Medical College Hospital. The injured person died at 2.35 am, hospital deputy superintendent Dr Amitava Saha said.

The other injured person, who suffered a fracture in one of his legs, has been treated at the state-run hospital, where railway doctors had also rushed on Saturday evening to provide necessary assistance, the ER spokesperson said.

Construction and repair work was underway at the century-old station building, nearly 100 km from Kolkata, an ER official said.

A portion of the roof of the portico at the station building collapsed near the enquiry counter, ER spokesman Nikhil Chakraborty said.

The incident, occurred in front of platform number 1 at the busy station on the Howrah-New Delhi route, did not affect train services, he said.

Another small portion of the same building had also collapsed around 9.30 pm on Saturday, but no one was injured as people moved away from the station premises after the initial incident, ER sources said.

A three-member committee has been formed by the Eastern Railway to conduct an enquiry into the cause of the incident, Chakraborty said.