Following allegations of police assault on students protesting during Chief Minister Mamata Banerjee's visit to the campus yesterday, a section of the students gheraoed the VC demanding her resignation. 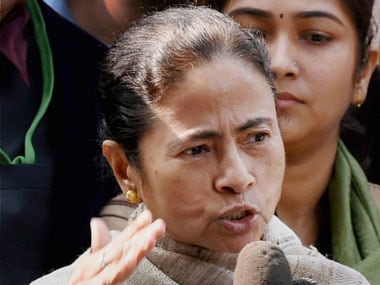 The gherao went on the whole night as students refused to let Lohia leave her office room which was filled with anti-administration slogans and posters. Walls and even her nameplate outside the room was vandalised by the students. During the night, registrar and other senior officials of the university were also present along with Lohia.

"It is not just about the chief ministers's visit yesterday and the following police assault on our students but the VC has failed on a number of accounts in the past also. So we have decided to not let her leave the campus till she resigns," Trisha Chanda, general secretary of the students union, told PTI.

The gherao also throws a shadow over the state-run varsity's third convocation ceremony scheduled for later in the evening. Many of the students have called for a boycott of the convocation.

When contacted, Lohia said she will ensure that the convocation ceremony goes on smoothly. "Let them boycott, but we will give degrees to our students. We have not done anything wrong to them. On the other hand we have always worked hard to take Presidency to newer heights. I do not understand what is the problem of these students. It is only a small group of students (which is creating the problem)," the VC said.

Trouble started after the chief minister entered the campus to attend a function last evening where she was greeted with slogans and black flags by a section of students.

The students said they wanted to talk to the chief minister seeking punishment to those responsible for the ransack of heritage Baker Laboratory of the varsity during a 2013 incident, but were not allowed to talk to her.

"We were protesting peacefully inside our campus when some policemen assaulted some of students. Eight of us were injured," the students said.

"We told the VC of whatever has happened but she is not willing to accept that the police thrashed us. We seek an apology from the police and the resignation of our VC for non-action," the student leader said.