Mumbai/Palghar: At least eight persons were killed in a huge explosion at a chemical factory at Boisar in Maharashtra's Palghar district on Saturday evening, a police official said. 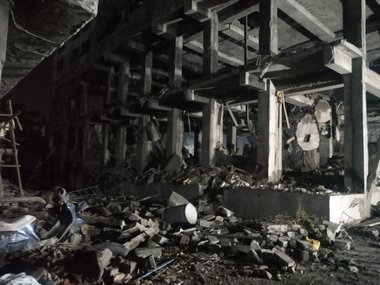 At least eight were killed in an explosion at a chemical factory in Boisar. ANI

Boisar is over 100 km away from Mumbai. The under-construction plant of Ank Pharma, where the explosion occurred, is located in a Maharashtra Industrial Development Corporation (MIDC) area at Kolwade village, the official said.

The blast, which took place during the testing of some  chemicals around 7.20 pm, was so huge that it was heard within a 15-km radius, and window panes of some houses in the surrounding area shattered, he said. The under-construction plant building collapsed after the explosion.

While eight persons were killed, the injured were being extricated from debris, the official said. A fire started after the blast but it was put out, he added.

Chief Minister Uddhav Thackeray announced assistance of Rs 5 lakh each for the kin of the deceased, a statement from his office said. The chief minister was monitoring the relief and rescue operation himself, it added.