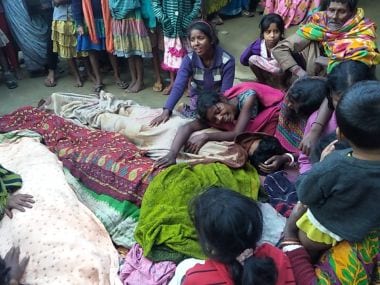 Assam killings LATEST updates: Even as ULFA (I) claimed that they were not behind the killing of five people in Assam, preliminary police investigation shows that ULFA was behind the shooting. Police sources have told Firstpost that the department felt that ULFA has denied responsibility of the killing in fear of losing popular support.

ULFA leader Mrinal Hazarika was arrested by the Panbazar Police, over suspicions that he might be involved in the incident in Tinsukia. Earlier, he gave a controversial statement, threatening to bring back the 1983 Assam riots and killing Bengali-speaking people. Former ULFA leader Jiten Dutta detained by Gaurisagar police in connection with yesterday's killings.

West Bengal chief minister Mamata Banerjee wondered if the attack was a reaction to the National Register of Citizens in Assam. She wrote in a tweet, “Terrible news coming out of Assam. We strongly condemn the brutal attack in Tinsukia… Is this the outcome of recent NRC development.”

Reacting to the Tinsukia shootings, leader of Hindu Karnti Dal Mithun Debnath said, "ULFA (I) has let down the whole of Assam through this barbaric act. These cowards didn't have the guts to kill Bangladeshi people. The people whom they killed are the indigenous Hindu-Bengali speaking people of Assam. We condemn the barbaric act."

ULFA (I), in a press statement, claimed that they were not responsible for the killings in Assam on Thursday. "We, the United Liveration Front of Asom (Independent) would like to make it clear to all concern authorities that our organisation does not have any involvement in the firing incident that occurred on 1 November, 2018 at Sadiya SAikhowaghat in Tinsukia District."

Three members of a family were among five people shot dead by suspected ULFA (Independent) gunmen while two others were injured at Kheroni in Assam's Tinsukia district Thursday night, police said.

A group of assailants with sophisticated weapons came to this village near Dhola-Sadiya bridge and called out five-six people from their house around 8 pm, they said.

They then opened indiscriminate fire upon those people before fleeing under the cover of darkness, a police officer said. Police suspect the gunmen belonged to the ULFA (Independent) faction as they were in battle fatigue.

Chief Minister Sarbananda Sonowal condemned "the killing of innocent people" and conveyed his sympathy to the bereaved families. "Strong action will be taken against the perpetrators of this dastardly violence. We will not tolerate such cowardly act," he told PTI.

Sonowal said he has directed state ministers Keshav Mahanta and Tapan Gogoi along with DGP Kuladhar Saikia to rush to the spot.

"We will not spare the culprits of the killings and they will be brought to book," he said.

The chief minister appealed to the people of Assam to maintain peace and harmony.

He also directed all deputy commissioners and SPs to remain alert.

According to Tinsukia Superintendent of Police Mukdhajyoti Mahanta, the bodies have been taken to the Sadia Civil Hospital for postmortem.

Singh expressed deep anguish over the incident, saying strongest possible action will be taken against the perpetrators of the heinous crime.

"Deeply anguished by civilian casualties in an attack in Upper Assam region. It is a reprehensible act of mindless violence. Spoke to Assam CM Shri @sarbanandsonwal regarding the incident and asked him to take strict possible action against the perpetrators of this heinous crime," he said.

Meanwhile, West Bengal Chief Minister Mamata Banerjee, in a Twitter post, wondered if the attack was related to developments around the National Register of Citizens (NRC).

"Is this the outcome of recent NRC development," she questioned.

Banerjee strongly condemned the incident and offered condolences to the families of the deceased.

"Terrible news coming out of Assam. We strongly condemn the brutal attack in Tinsukia... We have no words to express our deep sorrow to the grieving families. The perpetrators must be punished at the very earliest," she added.