Arnab Goswami vs Sagarika Ghose: Indian journalism is in a churn

Since this is an opinion column, my considered opinion formed after following their work over more than a decade is that Sagarika Ghose is an under-average journalist while Arnab Goswami shrilly advertises his mediocrity night after night.

I’m not being selective in picking just these two but for the context they generated in the last few days after Arnab Goswami’s now-famous interview with Prime Minister Narendra Modi. But to set the record straight, let me say that my equally considered opinion about most TV news talking heads and anchors spans the entire gamut from “below average,” “vacuous,” “shrill,” and “disgusting.” On TV, there is nary a space for serious and contemplative discussions and most participants are chosen for reasons other than original thought, scholarship or record of public service. You can call me old school but my old school mindset has never allowed me to marshal the courage to let facts come in the way of my opinions. To get an idea of what I mean by “old school,” I present an excerpt from the legendary Dr DV Gundappa’s essay titled 'The Profession and The Training of a Journalist':

…journalists writing on everyday worldly affairs must, as a prerequisite, have knowledge in the following subjects: (1) Politics (2) Economics (3) Jurisprudence (4) Logic. There is no knowledge or fact that is not useful to a journalist. Anything that is related to the life of humans will prove useful for a journalist at some point…. It is self-evident that a journalist must be endowed with the ability to write in a style that is simple, clear, decisive, unambiguous, and tight. However, this must also be accompanied by hard labour in at least two fields in art or science. He must be well-versed in the history of his own nation, and know its geography intimately. Because various countries and cultures have made inroads into our nation in our time, the journalist must at least be acquainted with the geography, history, and culture of those countries and cultures as well. He must constantly and everyday revise his labours in politics and economics. Likewise, he must also have decisive knowledge in art, poetry, drama, music, and sculpture. Thus, unless the journalist inculcates within himself specialized and in-depth knowledge in at least one field that falls outside the purview of his routine work, his standard will fail to rise higher than mediocrity…. on any topic that he writes, there will be at least one or two readers who are more knowledgeable than he himself is. He must ask himself what they would think about his writing. Such a thought process yields an attitude of healthy trepidation, which is the root of responsibility. The greater this trepidation, the greater this sense of responsibility, and the greater it motivates the journalist to read widely, deeply, and examine anything from as many perspectives as possible. Ultimately, this results in a greater benefit to the reader. This is how the paper earns the respect of the people and society…. However, the primary and basic qualification for a journalist is to develop a character of culture and refinement. (Translated from the original in Kannada by me)

I suppose this passage both foresaw and warned of the pathetic state that journalism would descend to, as exemplified today by a majority of the Indian English media.

In the Sagarika-Arnab spat that Firstpost itself has summarised quite well, it must be said that Arnab Goswami makes a valid point when he takes an open dig at the “machinations and intrigue of Lutyens journalism” and makes a veiled reference to their incurable support for the Nehru dynasty whose latest heir, Rahul Gandhi, left them “disappointed with how he let them down.”

Indeed, the wording of Sagarika Ghose’s tweet (which she later deleted) shows in full Technicolor how she views journalism: she equates an interview with the Prime Minister to a bestowal of favours on a journalist. 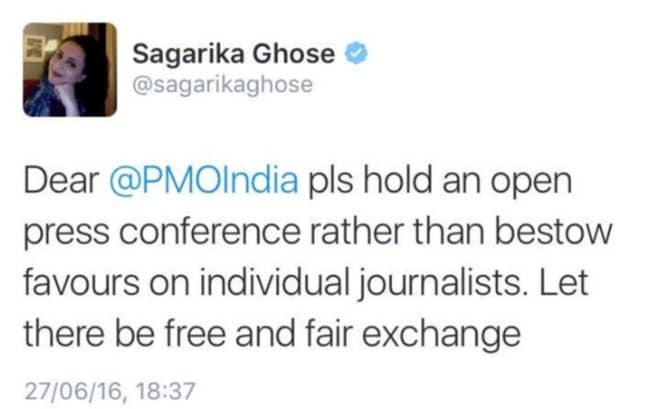 This is not journalism. It is a desperate and frustrated plea for political patronage, which pretty much characterises much of the Lutyens journalism that Arnab Goswami refers to. That there existed a media-political nexus was well-known but the appalling extent to which it flourished came out in the open in the last few years of the dark UPA-2 regime — the Radia tapes being the greatest symbol of the time. I highly recommend reading the late Vinod Mehta’s Editor Unplugged which contains really sordid revelations of the cesspool that the English media has become.

Neither is the aforementioned phenomenon of journalists seeking political patronage restricted to India or is of recent vintage. In his classic epigram, The Uncelestial City, the British poet Humbert Wolfe reminds us how

You cannot hope
to bribe or twist,
thank God! the
British journalist.
But, seeing what
the man will do
unbribed, there's
no occasion to.

Humbert Wolfe wrote this in the context of British journalists who acted as wanton apologists for the crimes of British imperialism, and it wouldn’t be far from the truth to say that large sections of Lutyens journalists continue to act as apologists for the Sonia-controlled Nehru dynasty and Congress party. This scathing expose by journalist Sandeep Bhushan in the Open magazine uncovers how some editors specialised in the “Sonia is unhappy” brand of journalism:

Just as I was gearing up for another ‘live’ report from in front of Mrs Gandhi’s residence, my boss literally stood before me and ordered me to spin the story around ‘Sonia is unhappy’ as a theme. I was left with little choice. Sonia had not issued a statement. Yet the story had irrevocably changed. The next morning, even the print media was full of the same spin… Stories impacting Sonia’s image are carefully choreographed right at the top, at the level of promoters and editors who are on first-name terms with key Congress functionaries such as Ahmed Patel. But Patel, the consummate spin doctor, also has a line with beat reporters; they need each other in the demanding 24x7 news cycle where a single ‘untutored’ line could damage the Congress President’s image… It has also assured him plum reporting options, including (maybe) a trip with the PM on his next foreign visit. When it comes to reporting on the Gandhis, this is precisely how much of the electronic media functions.

The seeds for said patronage were sown by and took deep and pervasive roots thanks to former Prime Minister Jawaharlal Nehru who gave away large parcels of land in Delhi to journalists ostensibly to “place a roof above their heads.” The value of these lands today is anybody’s guess. Ever since, press freedom halted at the courtyard of obligation, which then transformed into an active quest for patronage as it must.

Some have also argued that the reason for Sagarika’s outburst against Arnab is rooted in jealousy: that today he has become a far bigger celebrity than her, given how they both cut their teeth in TV journalism at the same NDTV school. Arnab obliquely refers to this in his retort by calling her a “has-been anchor” and how Times Now is the number one channel with billions of views, etc, which is why the PM gave him the interview.

Arnab is surely free to self-congratulate but the fact is that his ruthless nocturnal TRP expeditions have slaughtered even the notion of debate.

Setting that aside, when we closely observe the events of the 2004-2014 decade, we obtain two major revelations premised on a singular fact: a sustained and vicious witch-hunt of Gujarat Chief Minister Narendra Modi by the selfsame Lutyens media, which continues till date albeit with nearly-muted tenor. Entire careers were made, fabulous wealth amassed and influence peddled by mediapersons based solely on vilifying Modi. Indeed, Karan Thapar once issued a call for “the sudden removal of Narendra Modi” in the Hindustan Times.

First, there was a point after which Modi simply refused to interact with the media. I believe this inflection point to be the Karan Thapar interview on CNN-IBN which Modi cut short and walked away from. Sagarika Ghose was then a prominent anchor at the same CNN-IBN with a record of relentless Modi-baiting both on screen and in her columns. Second, Modi discovered that latest technology in connectivity was a far more powerful medium using which he could bypass the media and directly reach the masses. And it paid him handsomely.

And as we witness, his scorched-earth policy regarding the English media hasn’t caused any dent to his image or popularity whereas the public perception of the English media continues to become progressively dimmer.

Episodes like the Arnab-Sagarika spat augur well for the society as a whole because they indicate a churn hopefully for the better. The media code of omerta which till recently forbade journalists from writing against one of their own — this was most noticed in the Tarun Tejpal case where a section of influential journalists desperately tried to protect him, and attempts are still being made to resurrect him—seems to have been finally broken. The Open magazine report quoted earlier is just one of such instances.

Perhaps this bit from Lord Byron illustrates this churn best:

I stood in Venice, on the Bridge of Sighs,
A palace and a prison on each hand:

And such she was--her daughters had their dowers
From spoils of nations, and the exhaustless East

In purple was she robed, and of her feast
Monarchs partook, and deemed their dignity increased.

In Venice Tasso’s echoes are no more,
And silent rows the songless gondolier;
Her palaces are crumbling to the shore

Postscript: Perhaps Sagarika Ghose missed the irony before she put out that deleted tweet: both she and Arnab Goswami work for Bennett Coleman & Co. Ltd.