New Delhi: Army chief General Bipin Rawat on Wednesday said that there was a politicisation of the armed forces and the military "should be somehow" kept away from politics. 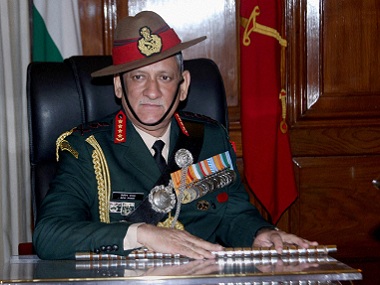 It is essential that the military stays far away from politics for a vibrant democracy, he said.

"The military should be somehow kept out of politics. Of late, we have been seeing that politicisation of the military has been taking place. I think we operate in a very secular environment. We have a very vibrant democracy where the military should stay far away from the polity," he said.

Rawat was speaking at an event organised by the United Service Institution.

In the "good old days", the norm was that women and politics were never discussed in the forces, he said. However, these subjects were gradually "inching" their way into the discourse and this should be avoided, the army chief added.

"Whenever (any) issue (of) linking any military establishment or military personnel where political entity comes in then... that is best avoided," he said.

The defence forces, he asserted, do best when they don't meddle in the political affairs of the nation.