Chennai: The Madras High Court on Thursday directed the Tamil Nadu government to clarify whether a governor under Article 161 of Constitution has to consult the Centre over premature release of convicts in cases handled by central agencies. 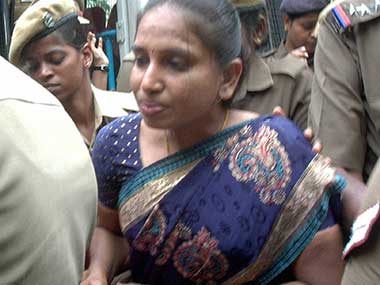 Nalini had filed the appeal against the 2016 order of Justice M Sathyanarayanan rejecting her prayer for premature release under a 1994 state government scheme under Art 161 (powers of Governor to grant pardon).

As per the scheme, life convicts who had served 20 years of prison term were eligible for pre-mature release.

The state government had opposed Nalini's plea before the single judge citing a similar matter before the Supreme Court.

The apex court in its order on the matter in March, 2016 had made it clear that for pre-mature release pleas under CrPc section 435, concurrence by the Centre was required in cases handled by central agencies such as the CBI.

When the appeal came up for hearing, counsel for Nalini argued that her plea did not fall under Sec 435 of CrPC and it was under Article 161. Hence, there was no need for consultation.

The bench directed the state government to answer the question whether the governor under article 161 has to consult the Union government.

Nalini had made a representation in February, 2014 seeking pre-mature release saying she had undergone imprisonment for more than 24 years.

She further submitted that her death sentence was commuted for life under article 161 of the Constitution on 24 April, 2000.

Nalini contended that she was eligible to be released under the scheme announced by the state government on 10 November, 1994.

She has been lodged in a special prison for women at Vellore for more than 26 years since her arrest in connection with the assassination of former prime minister Rajiv Gandhi at Sriperumpudur by an LTTE suicide bomber on 21 May, 1991.