Anti-CAA protests: Student movements are vital to democracy, but dangerous when led by ill-informed dissent

A few visuals of the ongoing “protests” against the Citizenship Amendment Act (CAA) have been etched in the mind.

In the first, a TV reporter is seen among the “protesters” returning from a rally and upon being asked as to what the protest was about, each one of them giving replies ranging from “fascist Modi government”  to “kala kanoon” without even being able to give the full form of the CAA, or for that matter, the National Register of Citizens. 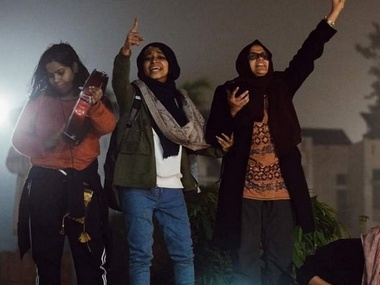 Cut to Jamia Milia Islamia, where a journalist was interviewing the newfound postergirls of the protest whom she named “sheroes”. Nothing unusual in this case, some may say, but what was significant in this case was that the journalist was gleeful while the “sheroes” were proclaiming Islam and Allah as their prime motivator for joining the protest.

The duo had no respect for the Indian State and had little consideration for other religions. Their act to protect someone who had indulged in violence was in the name of religious bigotry and not secularism. These two disconcerting visuals have, sadly, become the hallmark of the protest, which is being proclaimed as a protest led by students from various universities.

What is worrisome is students of these reputed universities have allowed themselves to be defined by these protesters and this does not portend well for the student movement in our country, which has a hoary past. ​We must be able to differentiate between students movement and an out and out religious mob taking to the street in the name of secularism and democracy. We must call the bluff and expose this sham.

Contributions of students in our struggle for Independence and various agitations in the post-Independence era are legion. No one could forget that thousands of students left their education to join Mahatma Gandhi in the fight against the British. No one could forget the role played by students, who convinced a reluctant Jayaprakash Narayan to lead the movement against the imposition of Emergency by the then dispensation of Indira Gandhi.

Many such students went on to play a significant role in Indian politics in the post-Emergency era and many of them are still contributing, in their own way, to Indian politics. No one can also forget the role played by students during the Assam Agitation which led to the signing of the Assam Accord; none can also forget the student movements in various parts of the country, led by the ABVP on national security issues. All in all, the student movement In India has played a positive role in not only contributing to the freedom struggle but even in the past seven decades.

However, the present round of protests is a clear departure from the past. Students seem to have been egged on by a misinformation campaign and thus Justice Santhosh N Hedge, a former Supreme Court judge, who is well respected by a cross section of society, is not off the mark when he recently said students are being used as shields by vested interests to foment trouble in the name of protests against the CAA.

What also seems to have been overlooked and not analyzed by the otherwise well-informed student community is the limited applicability of the CAA only to the persecuted minorities of Pakistan, Bangladesh and Afghanistan, who have been made to flee from these countries just because they profess a religion different from the State religion.

What has also been missed by these protesting students is that all the CAA does is to provide a statutory framework for citizenship in India for such people with a clear cut-off date. Rather, in the shrill ill-informed campaign which has been launched, with motives which are anything but bonafide, what has been lost is the fact that this piece of legislation has nothing to do with Muslims who are Indian citizens.

What also has not been taken into consideration by the students is that leaders of all hues from the Indian National Congress, to CPI(M) to TMC have, in the recent past, raised the issue of India providing a safe harbor for these persecuted minorities or to deal with illegal immigration that has plagued the country.

The students are doing a great national disservice if they are knowingly turning a blind eye to what Manmohan Singh, the former prime minister, had to say on the floor of the Parliament in 2003 or what Prakash Karat said with respect to the persecuted minorities in 2012 or for that matter what Mamata Banerjee spoke about illegal immigration wreaking havoc in West Bengal on the floor of Parliament in 2005.

If however, even after knowing about the views expressed by a cross section of the political leadership, who have nothing to do with the BJP or for that matter the RSS, the students still choose to support the protests against CAA not only in the National Capital but also in other parts of the country, it would be a calamitous choice with far-reaching consequences for the healthy student movement in India.

And by all accounts, it seems that the students have fallen into a trap where the protests against the CAA have been used as a ruse to resort to large-scale violence and destruction of public property and the deaths of innocent, all for an imaginary NRC which has not even been mooted by the Central government.

This imaginary issue of NRC has now become the fulcrum of the protests where posters and banners like “Khilafat 2”, a distorted signage of the Nazi symbol clearly resembling “OM” preceded by cuss words against “Hindutva” are being put to service. Use of such is a clear sign that the protesting students have become a willing party to a sinister design to strike at the very root of secularism enshrined in our Constitution.

Ironically, the protests against CAA started as something which sought to protect the secular values of our Constitution. The question that the protesting students need to ask themselves is that whether a protest that was launched to save the secular fabric of the country is slipping away and instead radical elements have dislodged them from a cause which they thought was dear to their hearts.

​It will indeed be a sad day when students, who once strengthened the hands of the Mahatma and made Narayan lead a successful movement against Emergency, become a tool in the hands of radical elements by passing on the mantle to such divisive forces.