In a rather unusual development, the Indian Institute of Technology (IIT)-Kanpur has set up a panel to decide whether Pakistani poet Faiz Ahmed Faiz's iconic poem "Hum dekhenge" offends Hindu sentiments. Some students of the institute had sung the poem, written in 1979, at a protest against the Citizenship Amendment Act on 17 December.

According to The Print, a complaint in this regard was filed by a faculty member, Vashi Mant Sharma. The complainant had objected to two lines from the poem that read "Jab arz-e-Khuda ke kaabe se/Sab but uthwaye jayenge” and “Bas naam rahega Allah ka”. Literally, the lines translate to “when all idols will be removed from God’s Kaaba” and “only Allah’s name will remain” respectively. 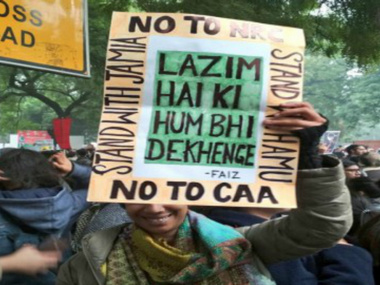 News18 quoted IIT-Kanpur director Manindra Agarwal as saying, "In the video, the students are seen reciting the Faiz poem which can also be perceived as being anti-Hindu."

In response, some students wrote in an article on the institute's student media portal that the chant was given a 'communal and misleading' interpretation. They further said that they had recited lines from the poem in reference to the police crackdown on students of the Jamia Milia Islamia in Delhi.

Context of the poem

The poem was written by Faiz to protest against military dictator Zia-ul-Haq's regime, which had begun in September 1978. The regime was marked by the use of repression and the enforcement of a conservative form of Islam. The poem had become more popular after singer Iqbal Bano rendered it at a jam-packed concert in Lahore on 13 February 1986. Bano had sung the song wearing a sari — attire that was banned at that time. As noted in this article, in the middle of the performance, the lights were switched off and the microphone was disconnected, but Bano continued to sing. The article further notes, "Her act of defiance became a defining moment in Pakistan’s history; the najm's recording achieved cult status not just in Pakistan, but across the subcontinent and became the anthem of protesters."