Chennai: A woman anti-CAA protester has come under the scanner of the police after her social media profile shed light on her role as a researcher with a Pakistan body, a top official said on Wednesday. 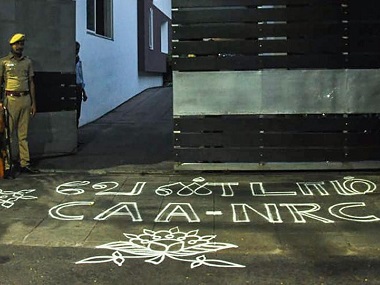 Rangolis were drawn in Chennai in protest against the Citizenship Amendment Act. PTI

A probe would be carried out to ascertain whether the woman, Gayatri Khandhadai, has links to Pakistan-based "Bytes for All", Chennai Police Commissioner AK Viswanathan told reporters.

Police sources told PTI that the woman protester has been a part of a slew of agitations held in the city against the Citizenship Amendment Act (CAA) and was also associated with the 'kolam,' demonstrations. She was present at the Madras University premises as well when the students there protested against the citizenship law last month, they said.

Dwelling on her background, Viswanathan said Khandhadai has the support of local outfits in Tamil Nadu, including an NGO. "If you look at her Facebook profile, she says that she is a researcher at Bytes for All, Pakistan," the senior police official said adding this body seemed to be linked to the Association of All Pakistan Citizen Journalists.

The extent and nature of the protester's "Pakistani connection," and "what," it is all about will be probed, he said. A check will be done to find out if there is any other "information," about her, he said.

He clarified that none were arrested or detained for drawing 'kolam,' (rangoli) in Besant Nagar days ago.

Viswanathan maintained police personnel had to interevene when an elderly resident there objected when protesters drew words opposing CAA (alongside a kolam already drawn up by his family members) in front of his house. The commissioner also released video clips to substantiate his claim that police had to intervene after the resident's objection.

The clip shows an elderly man asking why the words were drawn up (by protesters) and a woman bringing a bucket of water from inside the house and erasing it.

On Sunday, police had said eight people, including five women, were picked up for holding the protest without permission and causing inconvenience to others but were later let off.

DMK president MK Stalin has hit out at the AIADMK government for the police action, saying the detained persons were only excercising their right to protest. The group of women who drew rangoli against the CAA, had called on Stalin on Monday at the party headquarters to thank him for supporting them.