The Mithi River had played various roles for multiple generations of the city dwellers, starting from using the river as a transport system or defense mechanism in pre-colonial times, to the river as a part of the city’s water supply chain in modern times. Image: Wikimedia Commons

Editor's Note: This story is part of a campaign called Biodiversity by the Bay, run by Mumbai's Ministry of Magic. The campaign is a citizen-driven environmental initiative to protect the rich biodiversity that lives in, or makes a stop in Mumbai on its migratory path elsewhere. The story is the first in a series – 'An architecture student’s vision for building a greener Mumbai' – in which young architecture and urban planning students pen down their ideas for a sustainable future for development in Mumbai.

In India, historically water was an utmost significant resource for the communities as their religious, social & economic activities were truly dependent on the banks of a river. Ghats along the rivers were expressions of both social and cultural richness of cities. Whereas some cities, palaces, forts, and capitals were planned along river banks. Most of these cities could develop a distinct identity with the river, guided by geography, climate, local resources & history. Through time and transformation, the traditional riverscape and its inherent Indianness gradually faded away. The identities of vibrant cities were lost to misplaced aspiration and imported perceptions.

Similar in the case of Mumbai, rapid urbanisation and haphazard growth has completely transformed the natural landscape which once consisted of hills, forests, riverine systems, creeks, and mangroves. 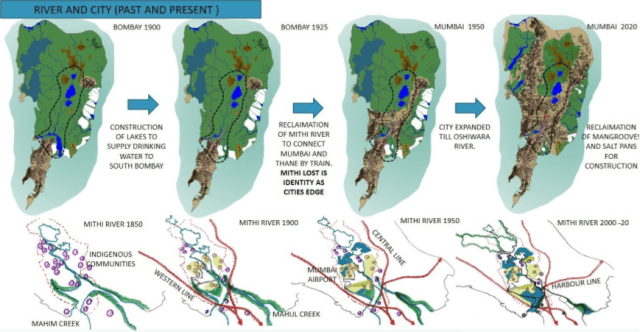 The river and the city (past and present)

Post industrialization, urban restructuring of Mumbai has increased the pace of development and added physical pressure on the city’s natural resources in order to create more residential and commercial units in a limited landmass. Mumbai’s riverine systems were at receiving end under the veil of such development, so much so that re-claiming ecologically sensitive land, for short term financial gain, has been the trend in Mumbai for the past sixty years.

Decay of a Riverine Ecology

Historically, river Mithi was Mumbai’s prominent edge defining Island city and Salsette Islands. The river had played various roles for multiple generations of the city dwellers, starting from using the river as a transport system or defence mechanism in pre-colonial times, to the river as a part of the city’s water supply chain in modern times. Besides, fishing in the estuarine region of the river was a source of livelihood for communities. The estuarine region was a global landmark for avian & wildlife enthusiasts, and additionally the river was a great advantage for the city considering natural topography based drainage system.

But in recent years, rapid urbanization and ever-increasing dominance of built spaces are threatening these natural systems that once played a vital role in deciding the form of the city. The edges of the river are constantly shrinking which indeed affects the ecology of the riverine system, including birdlife and fisheries in the creek. Negligent reclamation has created low-lying areas in the city that are vulnerable to waterlogging even during low rainfall periods.

Further, it also harms the context of the city’s urban artefacts including its heritage and aboriginal communities. The current scenario, land use, and development pattern of the city, continues to show a strong degree of anthropocentrism with a focus on economic and infrastructure development undermining important ecological processes and destroying the natural environment. This misplaced aspiration for development has caused many tangible & intangible issues with respect to the relationship between the river and the city.

A. Riverine systems to be recognized as a prominent edge expressing the co-existence of man and nature. 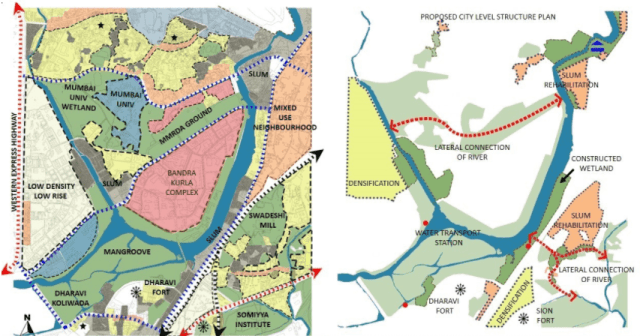 Conclusively, reviving a river and its ecology is a time and cost inductive task as it involves various stakeholders, perspectives, and biases, but few small initiatives to create an expression of co-existence of man and nature is currently the need of the hour for Mumbai.

The author is a young architect and urban designer from Mumbai, studying at the School of Planning and Architecture, Bhopal. His interest lies in understanding cities through various lenses with a focus on the relationship between nature and city. Madav is among a group of young architecture and planning students who have shared ideas on sustainable development for Mumbai, for the Ministry of Mumbai's Magic.

This story has been reproduced with permission from the MMM blog. Read the original article here.

Building social and ecological functions of coastal resilience calls for mitigation measures and adaptive strategies that include diversified land-based activities.

An architecture student’s vision for a greener Mumbai: Strategies for coastal cities to mitigate, adapt, regulate against sea level rise