Jammu: As many as 813 pilgrims on Thursday paid obeisance at the cave shrine of Amarnath in south Kashmir hills, an official said.

Another batch of 205 pilgrims, meanwhile, left Jammu for the Himalayan shrine. 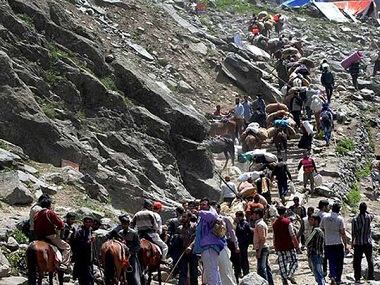 "Today (Thursday), on the 36th day of the yatra, 813 pilgrims paid obeisance at the Holy Cave and cumulatively, since the beginning of the pilgrimage, 2,57,589 yatris have had darshan", an official spokesman said.

Escorted by CRPF, 205 pilgrims left in a convoy of six vehicles this morning, he said.

The 40-day yatra began on 29 June from the twin routes and is scheduled to end on 7 August, coinciding with the festival of Raksha Bandhan.

Similarly, another batch 237 pilgrims comprising of 199 males, 38 females left Jammu for another mountainous shrine — Buddha Amarnath — which is located in the Poonch border district, officials said.