On Friday, NDTV's Ravish Kumar, ahead of receiving the prestigious Ramon Magsaysay Award for 2019, delivered a speech in Manila titled, "The Power of Citizen's journalism to Advance Democracy".

He is to receive the award for "harnessing journalism to give voice to the voiceless" and his "unfaltering commitment to professional, ethical journalism of the highest standards".

Later this month, on 22 September, Kumar is also set to receive another award, the first Gauri Lankesh Memorial Award that was announced on 5 September, on the occasion of the latter journalist’s second death anniversary, reported the Quint. 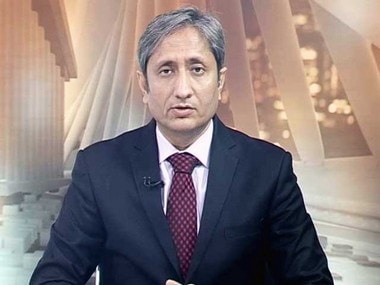 In his Manila speech, Kumar spoke about the current 'testing times' for journalists and common citizens."I believe that in today's times when the attack on our citizenship is all-encompassing and the state's surveillance apparatus is more overbearing than ever," he said.

He stressed on the need for 'free flow of verifiable information'."In other words, the media controls the diversity of the news stories, and specifies what interpretation of news events are acceptable. The media is now a part of the surveillance state. It isn't the fourth estate anymore, but the first estate." Kumar added.

He also took note of what was happening in Hong Kong and Kashmir and stated that people are out fighting still for citizenship. "The citizens of Hong Kong have challenged the government's effort to render citizenship hollow by refashioning objects of control into devices of liberation. The citizens of Hong Kong were willing and able to extricate themselves from the authoritarian network of information. This tells us that the state has not yet defeated citizenship." Kumar said.

While speaking about Kashmir, he questioned the month-long ongoing communication blackout: "What happens when the media, which is meant to gather, process and relay information, supports the shutdown of all sources of information? In doing so, the media stands against the citizen who is trying to learn about the world around her — not as a matter of curiosity, but for her survival and her family's well-being."

Kumar spoke about the need for citizen journalism. He said, "When the media turns against the citizen, then it's time for the citizens to take on the role of the media. Government advertising forms a huge chunk of revenue for the media today. Citizen journalism, on the other hand, is struggling to survive purely on public support whilst staying outside the web of the government patronage and advertisers."

He also urged citizens to be democratic. "We are in urgent need of Citizen Journalists during today's times but even more than that we need the Citizen Democratic." he stated.