Ahead of the Supreme Court verdict on the Ram Janmabhoomi-Babri Masjid land dispute case, the Ministry of Home Affairs has asked states to remain alert and ensure security in sensitive areas

Ahead of the Supreme Court verdict on the Ram Janmabhoomi-Babri Masjid land dispute case, the Ministry of Home Affairs told states to remain alert and ensure security in sensitive areas.

The MHA has also dispatched around 4,000 paramilitary personnel for deployment in Uttar Pradesh, particularly in Ayodhya. 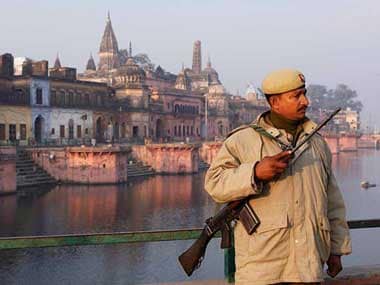 According to PTI, a general advisory has been sent to all states and Union territories asking them to deploy adequate security personnel in all sensitive places and ensure that no untoward incident takes place anywhere in the country, a home ministry official said.

According to PTI, the Railway Protection Force (RPF) has issued a seven-page advisory to all zones on security preparedness ahead of the Supreme Court verdict in Ayodhya case asking them to keep a close watch on religious structures near and within railways stations as they may be "flashpoints" of violence.

Sources also told the news agency that the RPF has cancelled leaves of its personnel ahead of the Ayodhya verdict and that additional staff will be engaged to escort trains. The RPF has identified 78 stations with high footfall for heightened security including stations in Mumbai, Delhi, Maharashtra and Uttar Pradesh.

The Supreme Court is expected to announce its verdict in the Ram Janmabhoomi-Babri Masjid demolition case by 17 November, the day of the retirement of Chief Justice of India Ranjan Gogoi who heads the five-judge bench that heard arguments in the case.

The local administration too has taken measures to maintain peace and prevent any untoward incidents ahead of the Supreme Court verdict on the case. In a series of restrictions, District Magistrate Anuj Kumar Jha had last week ordered against the use of social media to "insult" deities or to install idols and hold processions related to Ram Janmabhoomi.

He has also extended till 28 December the prohibitory order issued on 12 October, mentioning apprehension of breach of peace ahead of the verdict. The prohibitory order was earlier imposed till 10 December. Those violating it would be booked under Section 188 of the Indian Penal Code (disobedience of an order by public servant).

According to the order, all types of gatherings in private and public places that could hamper communal harmony have been banned. The district magistrate has also barred "victory celebrations" and "mourning processions"

"No attempt should be allowed to make any insulting remarks on great personalities, deities and gods on any social media platform such as Instagram, Twitter and WhatsApp. Besides, no installation of idols of any deity will take place without permission from the district administration," the order stated.

Uttar Pradesh DGP OP Singh had said last week that the state police is ready and if needed, the National Security Act (NSA) will be imposed on elements who attempt to disrupt law and order.

The MHA and RPF advisories have come a day after Prime Minister Narendra Modi discussed the matter with his council of ministers, following which he had directed ministers to refrain from making unnecessary statements on the subject and maintain harmony in the country.

The prime minister had also emphasised that the verdict should not be seen through the prism of victory and defeat, according to PTI.

Earlier, the ruling Bharatiya Janata Party (BJP) asked its workers and spokespersons to refrain from making emotive and provocative statements on the Ram Mandir issue. The party also told its MPs to visit their constituencies for maintaining calm.

The ruling party's ideological mentor, the Rashtriya Swayamsevak Sangh (RSS), issued a similar word of caution to its cadre a few days ago.

Several Muslim and Hindu groups have also released statements urging people to maintain peace and harmony accept the apex court's verdict when it is declared. Earlier this week, senior RSS and BJP leaders and prominent Muslim clerics and intellectuals held a meeting, during which it was stressed that irrespective of the nature of the court ruling, there should neither be "junooni jashn" (excessive celebration) nor "haar ka hungama" (brouhaha over defeat).

Last month, the Muslim parties to the suit had announced deferring the construction of the mosque in Ayodhya even if they win the case.

"We must take care of peace and communal harmony in the country first. The Muslims will definitely establish cordial relations with Hindus as we are having close and peaceful relations since ages. The court verdict will never be allowed to affect the harmonious relationships between us," Haji Mahboob, one of the key Muslim litigants to the Ayodhya dispute, had told PTI.

Reciprocating Muslims' gestures, the Vishwa Hindu Parishad had too announced the cancellation of all its programmes proposed after the ruling. On Thursday, it reiterated its stand, stating it has stopped stone carving work for the construction of a Ram Temple here for the first time since 1990.