Thiruvananthapuram: The century-old zoological park here has tightened safety and precautionary measures, days after a youth was mauled to death by a white tiger when he fell into its enclosure at the Delhi Zoo.

Additional metal sticks would be put in place in between the grills of the cages and steps would be taken to increase height of the walls of enclosures of big cats to prevent onlookers from falling inside, a top zoo official said. 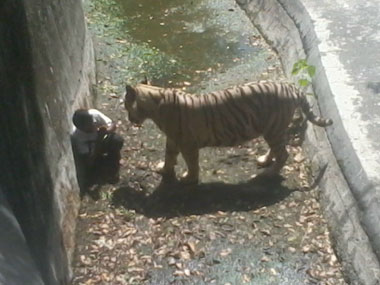 File photo of the white tiger who mauled the youth a few days back. IANS

"Taking cue from the Delhi incident, steps have been taken to fix metal sticks in between the grills of the cages to prevent onlookers from going near the animals. With this, visitors will be discouraged to put their hands inside the cages," zoo director B Joseph told PTI here.

"There is a tendency among visitors to put their hands inside cages to attract the attention of animals which may lead to tragic incidents. We are also mulling to introduce some modifications in the structure of open enclosures to avoid visitors jumping upon walls to take photos," he said.

The zoo, located in the heart of the city and one of the tourist destinations, would soon have new enclosures for blue bull, barking deer, hyena, jackal and giant malabar squirrel, he said.

Discussions to bring a white tiger from the Delhi zoo are in progress, he added. Post the arrival of seven anacondas from Sri Lanka, the visitor footfall in the zoo has increased manifold, he said.

"The zoo registered a total earning of Rs 35 lakh this month and this is a record," Joseph said. The zoo, spread over 55 acres, has a large number of animals such as tiger, leopard, rhinoceros, Asiatic lions and elephants besides a separate avian enclosure with Indian peafowl, white spoonbill and cassowary.